Tales from the Road 12 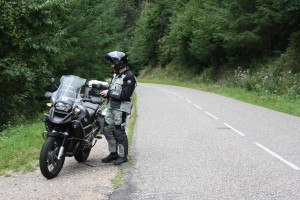 (On the way to the Eco Muse)
On Wednesday we went to the Eco Muse, an outdoor park of old skills and crafts, a bit like Bunratty Park in Co. Clare. Because it’s outdoor, it reminded me of a different motorcycle trip where we visited the Atlantic Wall World War 2 site, in Belgium. An area along the coast that had been held by the Germans in the second world war. Very interesting but very uncomfortable for me. Not because of the topic, although that was a bit disturbing too, but because we had arrived by bike and I wore my bike gear all around the wall for the two hour trip in hot sun! But as always I had learned from this experience and vowed to never repeat an outdoor site visit in bike gear.

So yesterday we drove to Ungersheim (the towns around here sound more German that French, because the area has been owned by Germany, Switzerland and France at different times through history) where the Eco Musee is situated. We arrived about 5pm and the park closes about 9pm (or so we thought…) I put my helmet in the left pannier, my jacket in the right pannier and took my skirt and shoes from the top box and off we went. Denis doesn’t remember the Atlantic Wall episode in the same way as I do so he wore his bike gear.

(Before changing out of my bike gear)
We arrived at the ticket desk, but just before it there were some toilets so I went in to change. Denis had got a call so he was outside on his phone. I took off my heavy boots, my socks and then my protection filled trousers and put on my skirt and my crocs. Phew, but now I was ready for the walking and the heat, this was going to be a different experience. And it was….

When I came out Denis was just finishing his call, so we went over to the ticket desk. I asked for “billets pour deux person, s’il vous plait”, and she said something that I wasn’t expecting…

I need to explain. With my very limited language skills, I tend to use my other skills to aid in communication. I guess what someone might be saying! So, if I ask for “two tickets please”, I expect the next thing they will say is the price. And since I’ve already checked the price I expect they’re saying the amount (in French) that I have in my head! It, works really, really well most times. But it wasn’t working here… So, I said “pardon?” while raising my eyebrows in an upturned V. She said the same thing again and it still wasn’t the French equivalent of €26! Meanwhile, Denis who never paid attention in French class in school and has a far smaller vocabulary than I have, had started to converse with the lady… in French!

And then he explained to me – they were closed! I know the word “ferme”- did she say it? Yep, she did, there, she said it again. Here I was, in my cool skirt and my comfortable crocs and there was nowhere to go. I was crest fallen (I am thinking of another phrase but that will do). Denis tried to persuade her that we only wanted a little visit, but she was quite insistent.

There was nothing to do but return to the toilets and change back into my bike gear. We took the scenic route home, through beautiful little villages and narrow winding tall pine tree bordered roads and by the time we arrived I felt much better. Who needs to see how they build the half-timbered houses or make cheese from raw milk, anyway. Well… me, I’d love to see it 😦 Maybe we’ll try again tomorrow….

Ps. We went today 🙂 It was beautiful. Tours only in French and German but a lovely place to be. 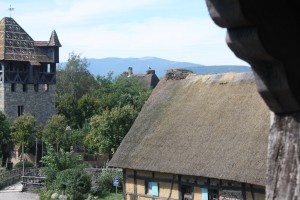 notice stork on top of roof in distance 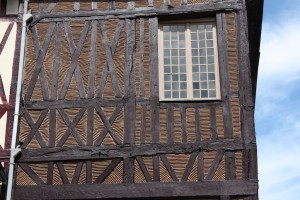 I live in Ireland☘️ and sometimes travel with my husband in our motorhome. In April 2022 we will be visiting France, Spain and Portugal. I will be writing here.
View all posts by Mairead →
This entry was posted in Newsletter. Bookmark the permalink.
Loading Comments...
%d bloggers like this: