Tales from the Road 18

In a previous post I said there were no soft cushions in this apartment, well I just found one! And a cozy red blanket. And I am sitting out on the balcony all wrapped up at 8am. The sun is shining but it’s still cool here in the shade. I can hear church bells ringing, traffic in the distance and the sound of metal blinds being raised. There is also the odd dog barking. The Italians seem to love their dogs almost as much as the French, although I haven’t seen them in the restaurants here yet.

We’re leaving Torino today, to travel to Nice, to another airbnb home. There’ll be no rushing today, just a leisurely spin to the south of France! Torino has been a lovely experience, built on a grid system, it’s hard to get lost wandering around.

The People:
They are warm and friendly, even when you’re wasting their time! I had a serious need to do some sewing yesterday so while I was in the city I found a wool shop and bought some embroidery thread and needles. The lady had very little English but she was willing to use it, so I decided to ask her for directions to a material shop. Lots of picking up a piece of my skirt and pointing to outside and she got it and she gave me directions. Against all the odds I found the shop. Inside was an Aladdin’s cave of bolts of material. Shelves lined three walls and each bolt was wrapped in brown paper with only the end of the material visible. I was definitely going to ask her if I could take a photo, but circumstances didn’t allow for that.

The owner was serving another lady and was taking down loads of bolts but none seem to be right. Finally the customer said something to indicate that she could serve me. I was looking for some felt material, it’s used for making little sewing projects like decorations or cat toys. So I did my best to describe felt and she went straight for a section of bolts with many colours – great, I wanted lots of colours.

She took down a pink one and began to unwrap it from its brown paper parcel. Then she brought out a measuring stick and asked how much I wanted. I indicated a quarter of a metre. She went off I presumed to get a scissors but instead returned with a pen and pad. She wrote down a number, it was 32,00 and she said “euro”. I looked at it for a moment before it dawned on me that it was the price – €32! I was expecting €3.99, or €5 max. She must have noticed my face falling because she said something else and then crossed out the 32,00 and wrote 30,00. Oh, no she thinks I’m haggling! I was stepping back from the material and saying (in English, making no helpful gestures, due to shock) “no that’s too much for me, I don’t…. I’m sorry.. thank you… I’m sorry”. She was saying “that’s okay, it’s very fine material”. I was saying “si, si, of course, I’m sorry, grazie… Arrivederci”. And I moved toward and out the door as fast as was possible with all eyes on me. And I had wanted at least three different colours – €96! For a cat toy!

But what was lovely about her was that at no time did I get the sense that she was annoyed with me. She seemed to accept that I didn’t understand and she willingly helped me understand. She did not judge me, and she was still nodding and smiling as I backed out the door! Needless to say there are no pictures!

The Metro:
On Monday afternoon I went into the centre of Torino to have a look. There is a Metro (underground) station beside the cinema up the road from here, so off I went to negotiate that. Now, I’ve been on the Paris underground and the London underground but I’ve never been on them alone. All those intersecting coloured line are supposed to help you find your way? They look more like a pattern for a patchwork quilt, in fact maybe….

Anyway, as Denis was working, I would need to find my way all by myself. So I did some research on Google and with some trepidation I set off on my journey. Turns out there was nothing to worry about. The Metro here was built for the Olympics in 2006 (winter), so it’s very new and easy. The ticket machine has an “English” button and if you choose it all the instructions are in English. From my research I knew I needed a suburban ticket. Oh yes, there was a map with coloured lines on it but I don’t know why – they’ve only completed one train line!

I follow the signs for the train to Porto Nuova and when the train comes I get on and sit at the front. And not behind the driver, front, but the very, very front, because there is no driver! All the trains are run by computer! I was very happily sitting up there until I noticed a sign, helpfully translated into English, saying “these seats are intended for children”. I pretended I couldn’t read and enjoyed zooming through tunnels, in the front for a change. 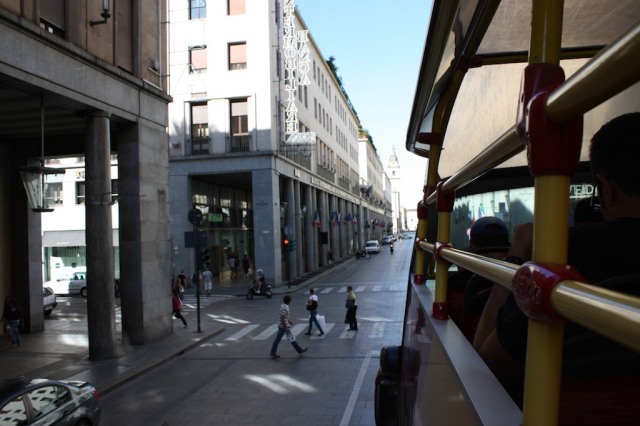 The Porticos: From the train station all along the Via Roma to the main square there are covered porticos (archways) so that you never need to be out in the hot sun. When I took the bus tour I learned that these porticos were created to keep the royals and the noblemen out of the rain and that there are ten miles of them around the city. (I may have the numbers wrong because this bus tour wasn’t as exciting as the one in Reims and I dropped off a few times.)

So with some sadness we leave Torino and start a new journey.