We got up this morning in silence – the hotel’s closed and it’s our last day.  Our boat doesn’t leave until 9pm so we decided to visit some more of the D-Day museums, as Arromanches was so inspirational. We headed for Pegasus Bridge. It featured in a movie called The Longest Day. It was a very interesting tour, mainly because the guide was so enthusiastic.

Encouraged by this visit and with more time to spare we thought we’d try the Juno Beach Museum, the lady in the tourist office recommended it. Juno beach was where the Canadian troops landed. With my four Canadian readers and a sister, brother-in-law and niece about to become Canadians maybe it was time to check Canada out…. 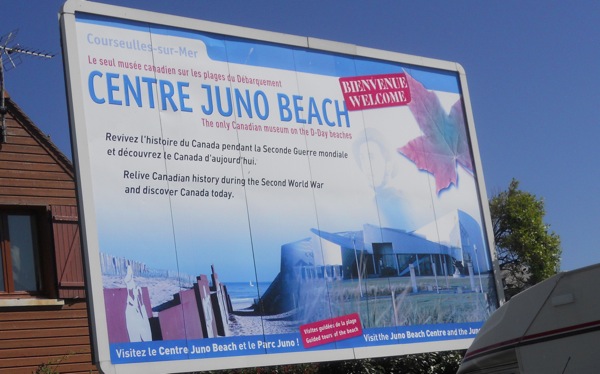 (Big hoarding on the way to museum)

I am delighted I did.

(Canadian flag blowing in the breeze)

Truly!  Firstly we arrive and are asking for our tickets in French from the nice young man. He asks something we can’t understand so he reverts to amazingly good English with a Canadian accent. He must have learned English from a Canadian? Yes, his mother, he’s from Canada! They have a program to bring students to France for four to eight months of the year to work at the museum. It’s related to the “follow your heart” bit….

The follow your heart bit….. each anniversary after 1944 Canadian veterans would return to France and see the places where they fought and where their friends and family members had died. At some point a group of them started to dream.

They wanted to have a place that would tell the story of the Canadians who had fought and died so far from home. And they wanted it for the children and the children’s children, down through the generations. That is why they bring young people from Canada to work at the museum. The student who guided our tour said she was the same age as the Canadian (and British and American and Dutch and Norwegian and other) boys who came up the beach in a landing craft on D-Day (the same age as the German boys who tried to stop them.). So at the end of the tour we all clapped and she was just leaving when I asked her if she knew any more about the story of the veterans who had the idea to build the museum.

(A look-out bunker, now covered in sand to the roof, beside the museum)

She said she didn’t but she turned to a man who was on the tour and asked him if he would answer that. I had though he was a tourist. But no… His Dad was one of the veterans who had had the dream! Well, you could have knocked me down with a maple leaf. (The design of the building is based on the five points of a maple leaf.) He went on to tell us that he was involved in the group that made it happen. They had to find the money and it was going very slowly until Walmart gave them a huge donation. They had a site at another location and that fell through. But they were determined and went down the beach to the Marie (Mayor) of the small town of Courielle sur Mer. In 2000 they started building at the site (it used to be a municipal campsite) he gave them.

I am mortified to say I didn’t ask his name, but I did ask for a picture……. 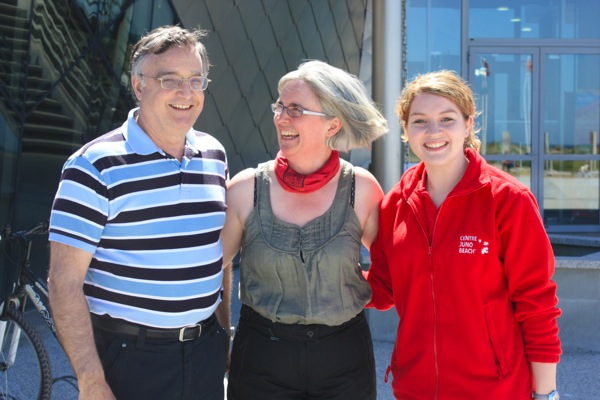 (The dream-maker, the guide and me!) 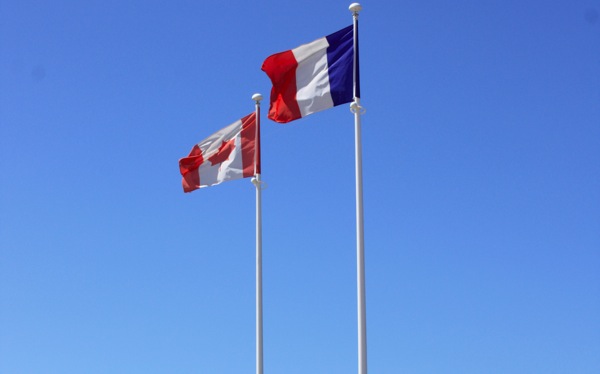 At the beginning of the tour, the guide (more mortification, can’t remember her name, picture above) started to ask people where they were from and how come they were here. Very nice little touch, very natural and maybe she doesn’t do it all the time, but I’m glad she did, because something really nice happened. So she was going around the group and we said we were on our way home and just came to have a look. All the others were from different parts of Canada that I didn’t recognise. Then this tall man with his son and grand-son (about 12 years old) said “I’m from Barrie, Toronto”. And of course I pipe up “My sister is moving to Barrie in July!”. Everyone had a little moment… wow…. and then the tour started. 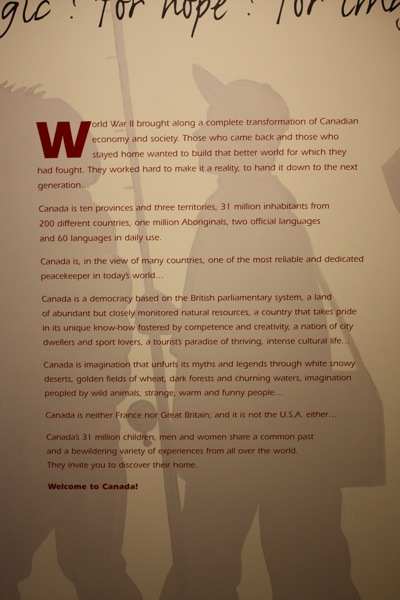 (Poster in the museum….love the bit “Canada is neither France nor Great Britain; and it’s not the U.S.A. either…”)

But just as we were moving on to a new bit, this lovely man gave me his number to give to my sister, because he remembers what it was like when he first moved to Canada. He was seventeen and he went to visit his aunt and stayed, fifty years ago. So Moira, remind me to give you his number, it’s in my camera case, I’ve already organised to go see him (and his son and grandson) when I visit you!

(It would take thirteen and a half hours standing under the scrolling names to see them all. And it’s not going slowly.)

As I write this I am on the boat and the captain has said there’s trouble ahead…. stormy weather…. (it all sounds like songs) but when you read this I’ll be back home cutting the grass or getting groceries.

I live in Ireland☘️ and sometimes travel with my husband in our motorhome. In April 2022 we will be visiting France, Spain and Portugal. I will be writing here.
View all posts by Mairead →
This entry was posted in Newsletter and tagged follow your dream. Bookmark the permalink.