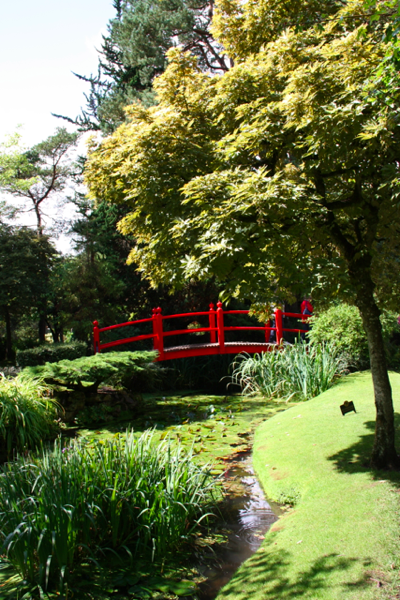 (The Bridge of Life)

Yesterday we went to the Japanese Gardens. Our admission included a tour of the National Stud (horses) but we just went for the garden and the food. We arrived around midday and it was busy, tour buses and families. Ok everyone with the tour stand by the wall. As luck would have it there was a torrential rain shower as we got our tickets so we had an early lunch. Back in the garden it as a bit too busy for photographs, each time I lifted the camera to point at something picturesque a little one ran up to it. Look Gran-Mam, look at the stone!  But I got a few.

(Couple of swans preening at the lakeside)

The garden symbolises the Life of Man. At the entrance you have the choice between the Easy Path and the Rugged Path. Of course we took the rugged path and before long were slipping and sliding on slick wet stones. Maybe the easy path would have been just fine….. We struggled on through the Cave of Birth – tight fit, the Tunnel of Ignorance – dark and wet, the Hill of Learning – more slipping and arrived at the Engagement Bridge. There’s a gap in the bridge and you have to leap (very small leap) across. On the Honeymoon Path there’s a Difference of Opinion and the path separates…  We bravely climbed the Hill of Ambition and arrived at the Chair of Old age.

As the sun was still shining we decide to have a look at the Stud or at least the paddocks with the mares and foals, but it was not to be… another shower had us sheltering in the Beehive Monastic Cells. These are modelled on a monastic site found at Skellig Mhichil, off the west coast. A bit dark but very dry we sheltered with a few of the families. This was Fiachra’s Garden. Fiachra was a 6th century Irish monk who left Ireland and founded a hermitage in France. He encouraged manual labour, gardening and giving to the poor  and is the French patron saint of gardeners. His garden here was designed to make us think of this man (and many more like him) who followed a path of adventure inspired by their passion.

Paths can be slippery – be aware! Mairead.