We’ve arrived with family in Toronto!

(Caoimhe, all set for her day at CNE)

Yes, here we are, we arrived in Toronto on Saturday. My sister. Moira and my niece/godchild Caoimhe were at the airport, waving banners and cheering as we exited the arrivals gate (well they may have been earlier…) We may have left a rainy and chilly Ireland seven hours ago but the sun was shining on our arrival. Moira and her husband John live about an hour away from Toronto in a town called Barrie, so as we beetled along the highway Caoimhe gave me a running commentary of the sights.

We had just enough time to get a tour of their house and change out of our cold weather clothes when it was time for dinner. Although we had eaten breakfast in Greystones, pasta lunch and teatime pizza on the plane, for some reason we were ready for dinner in Barrie as well. My sister and her family moved here about a year ago and stayed with friends until they bought a house. Tonight these friends were coming for dinner. Although I have never lived way from Ireland I have noticed the experience of others. It seems to me when people leave their native soil and their extended family they meet friends who become family. Grahame, Doris and Bobba (I’m spelling phonetic – it’s Ukrainian for grandmother) are family. 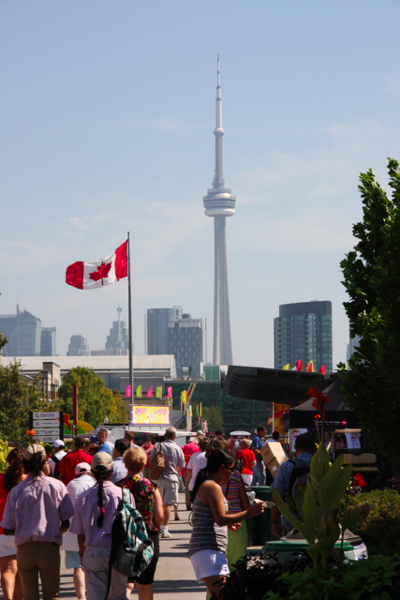 (CN Tower in the distance)

So, bright and early on Saturday morning we headed off with our new family (in their car) to the CNE. In case you haven’t heard of it the CNE is like all the shows that happen in the RDS in Dublin, but all happening at the same time and using all the buildings. So it’s Funderland (rides and carnival games), it’s  a Dog Show, it’s a Cat Show, it’s a Flower Show, it’s a Farm Show, there’s horses, there’s music, there’s a little train, there’s a sky lift, there’s booths selling products from countries around the world and there’s food… lots of food. But mainly it’s nostalgia. Parents who were brought here as children are back with their own children.

Every day in the CNE at 6pm there’s a parade of floats. With music and stilt walkers and clowns and animal characters. And the best thing about the parade? The beads. Mardi Grais plastic necklaces are thrown from the floats to the crowds lining the route. I’m not sure what it is about the beads but they seem to bring out the inner child in adults and we were in a unique place to spot this phenomenon – we were throwing the beads!

On our way to the CNE we stopped by Maryann and JoJo’s house (more family.) JoJo had prepared a map with instructions on how to get the best from our day while Maryann gave us tickets (free!). I think it was Maryann’s niece who got us places on a float. Initially Denis and I were a bit sceptical about the whole parade thing… how could we politely refuse when everyone had been so kind? Well… by the time the parade started you couldn’t have dragged us from that float. We were dancing to the reggie beat and hurling beads with abandon. The looks of delight on the faces of grown men and women as they caught a necklace was addictive.

(Our float before we took off – we were too busy to take pictures on route!! That’s me and John at the back)

I live in Ireland☘️ and sometimes travel with my husband in our motorhome. In April 2022 we will be visiting France, Spain and Portugal. I will be writing here.
View all posts by Mairead →
This entry was posted in Blogroll, Travel and tagged Canada, inner child, little things, photography, Toronto, travel. Bookmark the permalink.

2 Responses to We’ve arrived with family in Toronto!