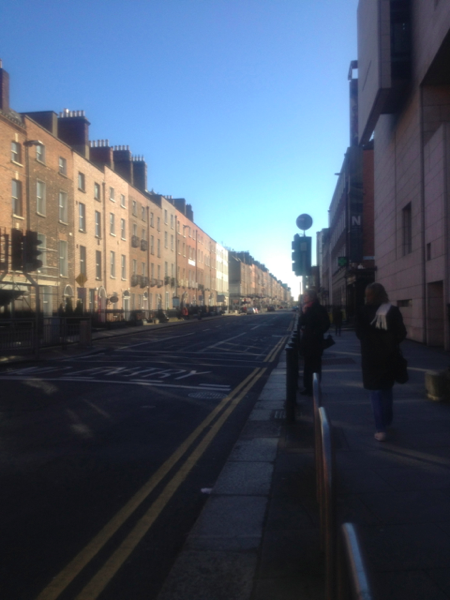 I saw a documentary on Friday in class about Caravaggio (1573 – 1610), his full name is Michelangelo da Caravaggio. Poor guy, he had a difficult life, one of his parents died when he was five and the other when he was eighteen. He was also literally poor and lived in the poor part of town. Unfortunately he was also easily offended and regularly got into fights, once killing a man in a duel. Paradoxically he was also very religious, taking the bible stories very seriously and wanting to bring them to life in a truthful and lifelike way. At the time this was not the accepted practice. Art was nice and paintings of the saints were pretty. Caravaggio changed that.

(The Virgin and Child (1440), Paolo Uccello, you can take a no-flash picture of this one – notice the baby’s feet are out of the frame)

He used ordinary people, those he met in the taverns as his models. Once when he painted the Death of the Virgin for a convent, the nuns returned his finished painting as it was too realistic – she looked dead! Of course it probably didn’t help that the model was dead, and when she was alive she worked as a prostitute…. He was very offended by the nun’s action. Another painting, Doubting Thomas shows Thomas’ finger going into a realistic looking deep cut under Jesus’ rib cage – not pretty.

(Postcard of Caravaggio’s The Taking of Christ (1602) – four hundred and ten years old. Not the postcard…)

He was thirty-seven when he died, in mysterious circumstances. His behaviour (the fights) may have been caused by the lead in the paint he used or maybe he was just sensitive… On Saturday I went into the National Gallery in Dublin to see his The Taking of Christ, no pictures allowed but I got a postcard.The first time I saw this painting I was struck by the shiny armour of the soldier, it was only on a subsequent visit that I realised the illusion of shine was created by paint and a very talented (if tormented) painter.

You don’t have to be happy to create art… or buttons… or crochet…. or stories… or cakes… or….  Mairead.

I live in Ireland☘️ and sometimes travel with my husband in our motorhome. In April 2022 we will be visiting France, Spain and Portugal. I will be writing here.
View all posts by Mairead →
This entry was posted in Art Works, Blogroll and tagged all is well, Art, behaviour, Caravaggio, Dublin, follow your dream, inspire, National Gallery, photography, problems. Bookmark the permalink.
%d bloggers like this: