Pictures in a Museum 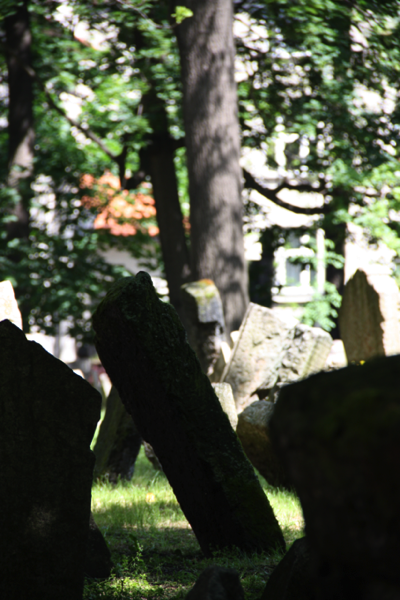 (The Jewish Cemetery is outside and photography is allowed here)

We went to the Jewish Museum yesterday. It was a beautiful sunny day and the streets were packed. The museum was also packed. It’s not an ordinary museum, it’s a synagogue, the Pinkas Synagogue with small rooms and winding staircases. You have to get up close and personal with the other visitors. On entering you see the walls are covered in writing, very neat letters, names and dates of births and deaths, every space on every wall covered. There are 80,000 names. They are people who lived in the area that is now the Czech Republic during the second World War, but because they were Jewish they were killed. There are so many names it’s hard to take it in and anyway you don’t want to take it in, so you keep walking. It goes in on its own. Photography is not allowed in this part of the museum.

(These are old graves)

I had heard there was an exhibition of children’s art upstairs in the museum and we went to see that. In 1941 the German occupying army started deporting Jewish people to a transit camp called Terezin, north of Prague. The church leaders deterred in the camp at the time considered it imperative to take care of the children, in a particular way. They wanted them to know about their heritage and they wanted to help them cope with their life in the camp. So there were lessons. Including art lessons.

A lady called Friedl Dicker-Brandeis had studied art at the Bauhaus (one of her teachers was Paul Klee.) She was a painter and she took on the role of art teacher to the children. She was very clear in what she wanted the children to gain: understanding, communication, self-expression and a channel for their imagination and emotions. By the time she was transported to Auschwitz in 1944, she had hidden two suitcases full of children’s drawings (4,500). These were found after the war and given to the Jewish community. Photography is not allowed in this part of the museum either. The art in the glass cases show dormitories, guards, gates of the camp, and ordinary things like the sun, friends, flowers. Most of the pictures have an exhibit card that records the artist’s name, date of birth, of death and title of picture.

“Everything can be taken from a man but one thing: the last of the human freedoms—to choose one’s attitude in any given set of circumstances, to choose one’s own way.” Viktor E. Frankl, an Austrian neurologist and psychiatrist as well as a Holocaust survivor.

I live in Ireland☘️ and sometimes travel with my husband in our motorhome. In April 2022 we will be visiting France, Spain and Portugal. I will be writing here.
View all posts by Mairead →
This entry was posted in Blogroll, Travel and tagged choices, crafts, Jewish Museum, museum, photography, Prague, quote, The Jewish Cemetery. Bookmark the permalink.
%d bloggers like this: