We’re back home after our week away. We have lots of photos and memories of beautiful places. I have lots of new ideas, as does Denis. Travelling for repeated stretches without the possibility of checking for messages, emails, social media allows little projects to be formed. I suppose you could call it daydreaming. Not every daydream needs to be activated but without action a daydream or an idea is just interesting. 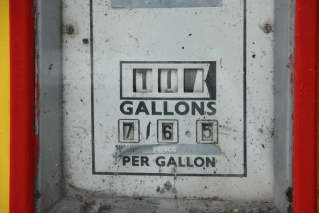 (Petrol was measured in gallons and charged in pounds, shillings and pence)

Like the idea I had on the first day to photograph old garages – the ones that fix your car. Not the big fancy ones that also sell new cars. The ones that were probably built in the 1950s or 1960’s. They are usually square concrete buildings that some might call ugly – not me. I see a glossy coffee table book with pictures of the owner and some of the staff standing outside the rusted sliding door, with the garage name visible over their heads. I see moody dark pictures of the workbench covered in tools, the only light coming through a small cracked window. I see a paragraph on the story of the building, how the present owner came to be there and who started the enterprise.

For three days I searched the edges of towns we entered trying to spot the type of building I wanted. By the end of the second day I’d seen four and each time I was filled with a bubble of joy. Unfortunately, the bubble of joy lasted longer than it took to drive past and when I woke up I realised I didn’t know where we were, I wouldn’t be able to find that garage again and I hadn’t taken a picture. At the end of day three I decided to share my idea for a garage coffee table book with Denis. As I shared I realised the book would never happen it was just an interesting daydream.

There are a few reasons. First, the market for people interested in square concrete garages is probably very small. Second, coffee table books are very expensive to produce. Third, I’m not confident in my technical ability to take the kind of pictures I see in my mind. Fourth, I am way too afraid to approach the owner of a garage and explain my daydream. But, the main reason this idea will never become a reality…. is because the daydream has nothing to do with garages, it’s all about forgotten memories that fill us with bubbles of joy and we don’t even know why. That’s the great thing about travel, about daydreaming about being in the fresh air with no smartphone… you end up discovering something you didn’t know about yourself, something you didn’t know you didn’t know, if you follow me.

(I scanned the picture of my Dad’s garage above into my laptop today so that I might at least have one old garage picture. Then I noticed for the first time there’s an adult (my mother?) and child (me? my brother?) standing at the door to the shop)

Until the next journey, Mairead.

I live in Ireland☘️ and sometimes travel with my husband in our motorhome. In April 2022 we will be visiting France, Spain and Portugal. I will be writing here.
View all posts by Mairead →
This entry was posted in Blogroll, Travel and tagged Birr, garages, Ireland, little things, photography, story, travel. Bookmark the permalink.
%d bloggers like this: