The Rock of Gibraltar

(At the back… Ruby and The Rock)

We’ve moved. We’ve left our campsite near Lagos and we’ve left lovely Portugal. We’re in search of a little more warmth and off to somewhere sunny in Spain.  But on the way we visited Gibraltar. Gibraltar is a very small peninsula jutting out into the Mediterranean Sea, at the south of Spain. It is also a British overseas territory. They have a Union Jack flag and they speak English. And Spanish. It is interesting to hear people weaving their speech between Spanish and English depending on who they are talking to. We were sitting outside having coffee and there was a local couple sitting at the next table. One moment the lady was speaking with a very pronounced English accent in English to a friend passing by and next thing she was speaking what sounded like fluent, flowing Spanish, in a Spanish accent to a different person. 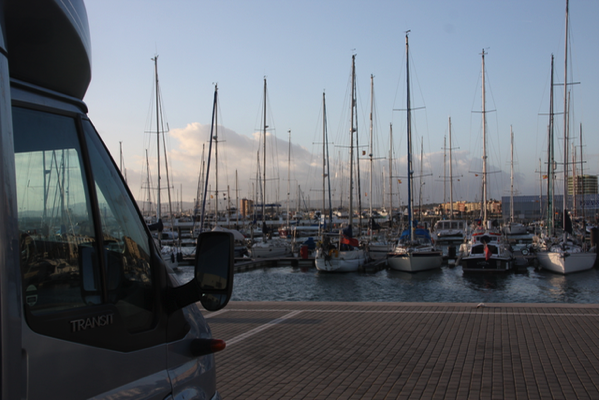 (At the front… Ruby and the marina)

The currency is pound sterling although they also recognise the € (kinda). We arrived in the town of La Lina on the Spanish side of the Gibraltar/Spain border on Saturday evening and stayed in a motorhome car park at the marina for the night. Next day, Sunday, we set off to have a look at this little bit of Britain in the Mediterranean Sea. It was a beautiful sunny day on the Spanish side of the border as we entered passport control. A machine read our passports and then a human read our passports and then we were in Gibraltar. It was sunny there too! Almost immediately we passed their airport and then we got to cross the real, live, working runway! There were no planes at the time… so we stopped, briefly, to take a few pictures.

(Quick stop for a photo in the middle… Of. A. Runway!)

All the street signs and shop signs and advertising billboards are in English. We were hoping to go to the top of the rock and see the apes, but the cable car was closed (and so was the Marks and Spencer shop – closed on Sundays). No problem we decided we could probably do with a bit of strenuous exercise and began the long, long, sunny day, steep, climb by foot… Problem. Until we saw a bus… It was at that point that we realised the recognising of the € might be a bit tricky. 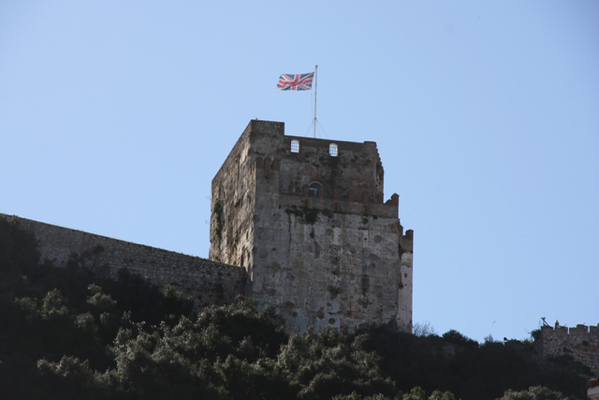 The bus driver was very friendly and unfazed by our slowness –  we didn’t know the fare and we held up the whole bus searching for change but we scraped together exactly the right amount – €4. The bus was going to Europa Point where there were beautiful view of Africa (no monkeys/apes though). We took loads of pictures and decided to go back down on the next bus. This time we’d be prepared so we went to the little shop to get change for a €20 note as we had nothing smaller and no coins left. Unfortunately, in spite of us being more than willing to buy some chocolate (more than willing) the shop did not have change of our €20. We were in a bit of a bind… I suppose a little more walking might have been possible… We went to wait at the bus stop. A very friendly lady with her husband and two children told us the drivers are used to giving change. No problem so.

(The lighthouse at Europa Point)

Problem. The driver (not the previous friendly one…) didn’t have change. A nice older man offered to give us the change but he thought we had pounds, sadly when he realised it was euro, he rescinded his offer. Do we have to get off? The driver said I’ll wait while you go to the shop. We tried that, they don’t have change. He said, go on so, sit down. We were very flushed taking our seats. The nice lady’s husband, joked, I bet you’re feeling embarrassed now! and all of us in the English-speaking section of the bus laughed. Gibraltar is a very friendly place. No problem so.

(That’s Africa over there!)

Problem. The bus driver didn’t laugh. He changed his mind, give me the note and I’ll go to the shop. Everyone stopped laughing… Denis went up with our €20. The driver hopped out of the bus, over a wall, around the playground and up the path to the shop. The whole bus waited. Someone joked, Tourists!  I think he was joking. I was trying to communicate an I’m sorry to the non-English-speaking people but it mustn’t have translated well, because they were looking at us, but not in a loving way.

Next thing the driver is on his way back with change! It must have been some kind of miracle thing where they discovered change in the till… Whatever it was, the bus started and there was just a bit of mumbling… not sure what it was about, probably not about us… probably, I was feeling very flushed again.

For the rest of our day in Gibraltar we used the credit card, Mairead.

P.S. I’m way over my embarrassment budget so I’ll be giving up embarrassing things for a week or two.

I live in Ireland☘️ and sometimes travel with my husband in our motorhome. In April 2022 we will be visiting France, Spain and Portugal. I will be writing here.
View all posts by Mairead →
This entry was posted in Blogroll, Travel and tagged acceptance, Gibraltar, nature, photography, problems, shame, Spain, travel. Bookmark the permalink.

8 Responses to The Rock of Gibraltar