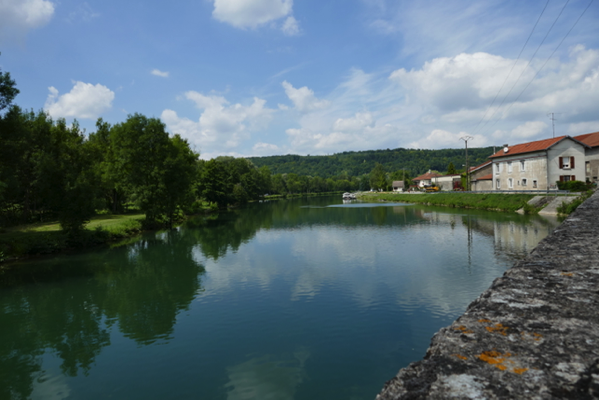 We’re back in France and we’ve been wandering along the river Meuse while we’re here. Never heard of the Meuse and very happy to find it. And we’ve visited another war memorial/museum. It was at Verdun, called Mémorial Verdun. It was very interesting and again very sad. Each of these war museums have an effect. I had forgotten that and didn’t realise why  I was feeling a little bit miserable for the past few days… ah that’s it.

It was quite a new museum and I felt a sense that the objective seemed to be one of acceptance, understanding and forgiveness. I do wonder if that’s just where my mind is at the moment and if maybe every other war museum has had the same objective. In this museum for every French piece of information there was a similar piece of German information. For example they had quotes printed on the walls, one from a French soldier saying something like…there was death all around and he was afraid. Then a different quote from a German soldier saying… there was death all around and he was afraid. I wish I had taken pictures of these quotes because my memory is not doing them justice.

There was a lot to take in, we were there about 90 minutes but after the first 30 I was just wandering, getting a feel for the place and I had stopped reading. It was only when we got to the part about how the postal system worked during the war that I seemed to wake up and start reading again. I like writing letters, in fact I always think of this blog as a letter home. I also send postcards or cards for a celebration but have no idea what they say… I recently sent my niece, Caoimhe, a Congratulations on your Graduation card ( in Dutch). Well I thought it was congratulations… it was condolences. Her mother said she took it well. Dutch is a difficult language to understand, I can confirm. 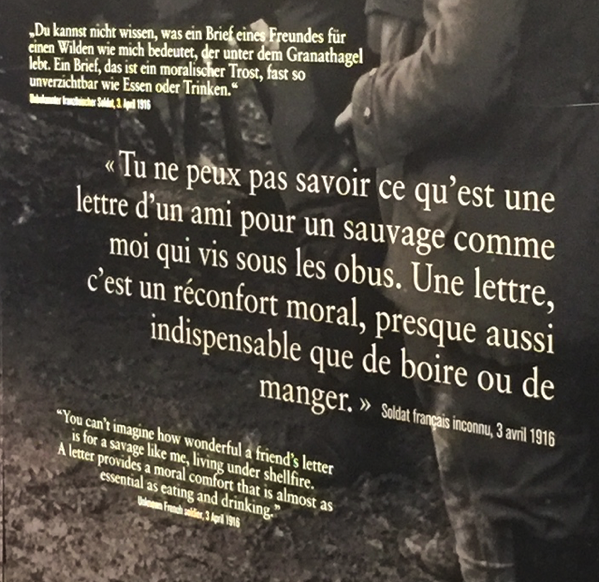 Anyway, I had noticed in previous museums, memorabilia including letters from soldiers at the front. I wondered at the impossible logistics of delivering letters or even of writing letters. Yet here was the proof again and again in the glass cases of museums all over the battle lines of France and Belgium, that letters were sent and received.. Of course letters counted then to the families. Later they counted as historic references and connections to real people.

The vastness of the numbers of people killed in the first world war keeps me disconnected from the reality but their letters reconnect me. I remember one of the first museums we visited on the trip was the Canadian World War I Museum near Arras and there was a letter from a Dad to his daughter talking about her teddy bear. The daughter had given her Dad a teddy bear to take care of him when he was away and the Dad was saying that teddy was doing fine. Unfortunately, the teddy bear was returned to the little girl but her Dad was not. That little girl would be 112 now if she was still alive.

I have a nightmare, it is the future. There is a woman in a museum, she is related to me but a hundred years after me. She is wandering from screen to screen reading all the information. She is troubled. She understands herself to be a good person but in this museum she does not feel like a good person. The technology is very advanced and everything she reads is related to her own ancestors. She can read and see what I was doing while the wars were going on. The wars that are going on now. She cannot understand why I did nothing. She can’t understand why I did nothing to help even one child who was hurting in these wars. She is ashamed to be related to me. She leaves the museum and vows to do something now, something different, something useful. The nightmare ends and I wake up never knowing what it is she does… 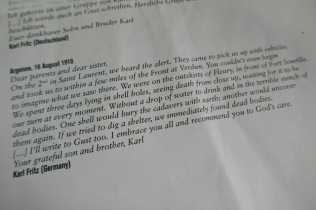