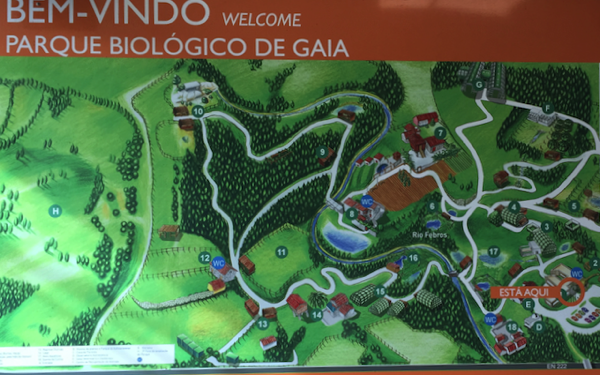 I woke up early this morning to birdsong. The rain had stopped and I had an idea. Before I could change my mind I had popped on some shoes, my furry fleece and was standing outside the van recording the sound. We’re still parked at the Parque Biológico de Gaia so imagine a lot of birds. I walked for a few paces to position myself where I thought the loudest birds were and turned on the recording app on my phone… Before long I was mesmerised but then I noticed something move in the park behind the trees.

It was when Fernando was taking me on the tour of the park that I realised the motorhome parking overlooks the deer enclosure. There’s a line of trees between us but at certain points the trees thin out and you can see part of the enclosure. Their area is quite big so the deer were off in another section most of the time we’ve been here but this morning as I listened to the birds I realised the deer were less than a 100m from me.

(The lighter coloured deer by the fence was very cute, from time to time she used to put her head through the fence and nibble on the green plants and then wriggle her head left and right to get it back inside the fence)

There were no one around just me and the deer and it was awesome… There are lots of signs around the park telling you that the animals don’t like noise so visitors should be quiet and respectful. Well I just love rules and boundaries, I see them as guidelines for a happy life. So I was more than happy to stay quiet and this morning I was rewarded by the company of deer. They are so calm and gentle and slow and focused and standing with them I felt calm and focused too.

(I promise you that fuzzy bit behind the branch in the middle of this photo is a red squirrel, you can just see his little ear)

My phone was still recording sound when I noticed something moving in the tree above me. It was a red squirrel, he mustn’t have noticed me because he squirreled (you can’t call it running, can you?) towards me and then stopped to shake his tail and squirrel away again out to the edge of the tree’s expanse on the tiniest of branches. Until he jumped to the next tree and was gone from my sight.

(I know its hard to make out but…that one in the middle, that’s a stag!)

When I looked around again, there was a stag in with the deer. With huge antlers. Walking around. Just over there, over the fence, across the path, over the other fence. A stag!

I love this lovely life, Mairead.