(That’s the Atlantic Sea out there)

We’ve travelled a little further south and now we’re in a car park behind the sand dunes at Furadouro. It rained when we got here. It rained all night. Really. All. Night. It’s raining now. But would you believe as I’m writing the rain has stopped! It has.

I’m still reading the 10% Happier book I was telling you about and the idea that things change and nothing, neither good nor bad lasts…. well when it rains as much as it has been here one might fall into the belief that it will never stop. One might become a little anxious and stir crazy. But I’ve been noticing… it isn’t raining all the time. It is raining more than one might expect as a visitor to Portugal, but it does stop from time to time. It stopped at 6.35pm last evening and we went out for a meal. Then it started again 90 minutes later when we were back in the van, which could be considered fortuitous. Very.

It could also be considered very fortuitous that the good stuff doesn’t last either… during last summer there was a week of a heat wave, do you remember? Well, it was too hot – I know unbelievable, but I remember thinking, “this is way too hot”. Well that didn’t last either, a week later, I was cycling in the rain wondering if the sun would ever come back out… 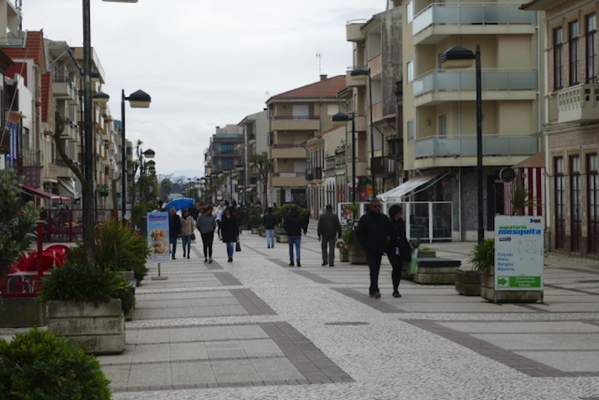 So here we are escaping the snow but getting rain instead, it would be absolutely fantastic if I could uncover a little life message… wouldn’t it? Well, it would and I think I have. You see I had heard of the nothing lasts thingy before and I was “duh! Yes I know nothing lasts, so what?” Here behind the sand dunes of Furadouro with the sound of rain pelting against the tin (poetic licence) roof, I think I finally understand what the so what is…

(Even the fences are relaxed)

It’s to do with our thoughts and our feelings. When we think the rain will never stop it makes us feel something like frustration or maybe fear but definitely annoyance. Now, we might know the rain will eventually stop but… we don’t allow that knowing into our thinking. So we wander around in this thinking and we feel so very, very frustrated because the rain is never going to stop. We actually forget the rain always stops. On top of that we don’t even notice when the rain does stop because our thinking isn’t interested in stopped rain it’s searching for something to be thinking about that makes us feel frustrated or annoyed.

(I finally asked someone if I could take their photo – can you see them up there?)

Once upon a time there was a woman living beside a lighthouse. She was a very unhappy woman. This woman loved the dark. But every night just as darkness fell instead of feeling happy this woman felt annoyed… because that’s when the lighthouse started to shine… all through the night. She had put up blackout curtains but still felt annoyed with the light. One night there was a terrible storm and a small boat was wrecked on the rocks under the lighthouse. The following morning the woman was walking along the cliff when she saw the wreck and climbed down to check for survivors. She found the sole occupant of the boat, a child, barely alive and carried him up to her house. Within a few weeks thanks to her care the boy had recovered enough to enquire where he was and what had happened. The woman had to explain that sadly his boat had been destroyed and he had had a lucky escape. But the child was very confused because he had no memory of a boat, he had no memory at all.

In spite of that he continued to recover and soon the woman found she was very glad of his company around her little house. He was very helpful and before long was even cooking simple meals for them. There was one thing though, the boy hated the dark. So much so that as soon as night fell he became afraid. And it was getting worse. The woman felt so grateful to him for the difference he was making in her home that she wanted to do something to help… so she took down the blackout curtain in the boy’s bedroom and explained that the lighthouse would shine on him all night long. In the middle of the night the woman was awoken by the child’s crying. Racing to his side she asked what was the matter, “the light keeps going off”, he cried. The woman was astonished, she looked out at the lighthouse and for the first time noticed that the light went on and off, on and off, it didn’t shine all night long. In that moment she lost her annoyance with the lighthouse. She held the boy’s hand until he fell asleep and then she removed all the blackout curtains from her home. Next morning the boy’s parents arrived (the story had gone viral on Facebook) and took him home…

I live in Ireland☘️ and sometimes travel with my husband in our motorhome. In April 2022 we will be visiting France, Spain and Portugal. I will be writing here.
View all posts by Mairead →
This entry was posted in Blogroll, Travel and tagged acceptance, all is well, awareness, behaviour, camper van, little things, outdoors, Portugal, problems, rain, story, thinking, travel. Bookmark the permalink.
Loading Comments...
%d bloggers like this: