(Today we went to see the ruins!)

The rain stopped and sun came out…and off we went to the roman ruins at Monografico de Conimbriga. These are the ruins of the old city (about 1800 years old!) of Conimbriga and the nice English-speaking man at the ticket office told us to bring it alive by imagining we were walking along the streets when it was still a living city. I tried.

(Here’s part of the roman road going from Lisbon to Braga. Can you see the parallel lines? Horse cart tracks)

When we got to the Lisbon to Braga road I was trying really hard to imagine we were back in 194 AD. First thing I tried to imagine were the carts but I couldn’t see the cart tracks so I tried a little harder. It never works for me to try harder, well, trying doesn’t really work. (I could see the tracks when we were leaving and I’d stopped trying…)

(Can you see the “carpets”? And look through the door and out into the enclosed garden with pools and fountains (you’ll have to imagine the fountains they were’nt working today because of the recent weather))

But then we went into the House of the Fountains. At first glance it’s a load of low stone walls set out in squares in a barn. So I tried really hard to imagine I was going into a house. And then I saw the mosaic floors… I didn’t have to try anymore. I could see room after room covered in mosaic carpets. And the fountains weren’t in the house they were through the (imaginary) windows in the garden. I loved it! I took a picture of practically every mosaic! I want to doodle every single one of them before I get home. 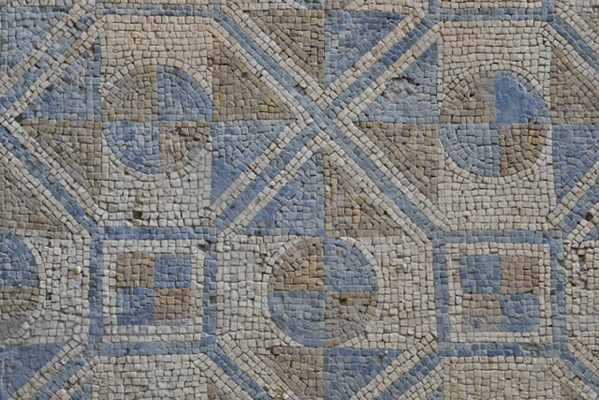 I took loads of close-ups too so I can remember them. Can you see how small the square bricks are that make up the mosaic? I’m guessing 3 or 4cm square. Look how many it takes to make a small square – 25 little teeny tiny square bricks! They’re called tesserae. And they were all made by hand and fired in a kiln and assembled by hand and cemented in place by hand and levelled by hand… 1800 years ago.

(Here they are up really close)

After that we saw lots of houses and the city baths and shops and then we checked out the Forum, a huge open plaza with just three columns suggesting the numerous that would have stood when this was the center of the city… 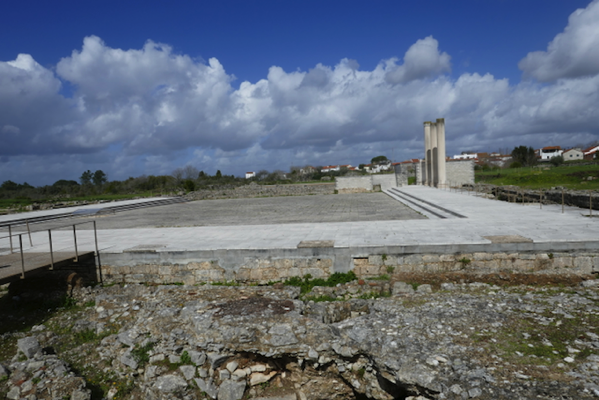 (The Forum with the three columns to the right. The walkway you can see to the left above is standing in for the entrance to the Forum plaza…)

(…and this is the model of the Forum at the museum)

The reason this site is in such good condition is that it was abandoned in the middle ages. What normally happens is a new city is built on top of old ruins. So all over the old Roman Empire there are hidden towns and hidden mosaics… mmm. It took us a couple of hours to go around all the ruins and we read later that only 17% of the city has been excavated. 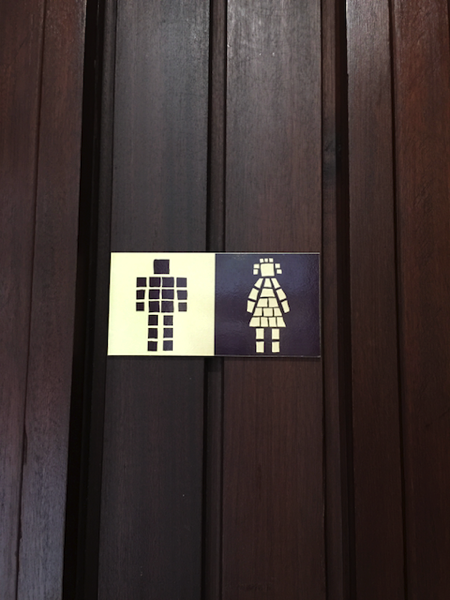 (Look at the cute mosaic signs for the bathrooms!)

I’m really glad the rain held off and I’m really glad our friend the chief of police told us about this place. He told us the story of when he served in Iraq and walked into the office of the police chief of a small town there and on the wall was a poster of Monografico de Conimbriga. It turned out to be the dream of this man to one day visit Conimbriga in Portugal!