To Lisbon by river…

After the ruins we moved an hour further south to a small town called Villa Nova da Barquinha. It is right on the river Tagus. That’s the river that starts in Spain and runs out to the sea at Lisbon. When we arrived we parked as close to the river as we could. I did think, what a fast flowing river. It was definitely rushing past. 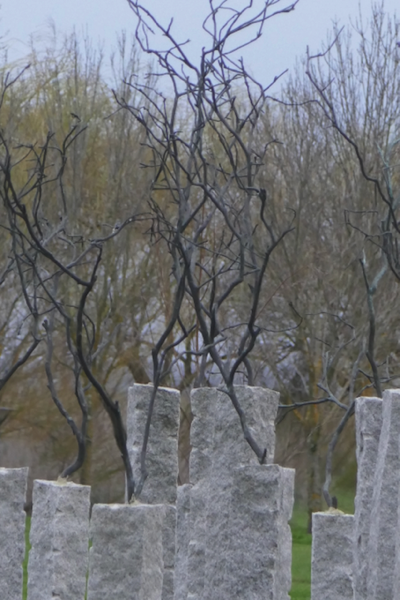 (Another art piece, my favourite, stone columns with wire trees)

Also, the reviews in the parking app. mentioned that it was a quiet spot by a nice park and although it was beside a nice park, it wasn’t very quiet. Cars arrived constantly all afternoon and even thought it was raining most of the time, the occupants would hop out and go down to the edge of the water. Then they’d get back into their cars and drive off. By 6pm it was getting dark and the arrivals and departures had decreased.

(Can you see the crime scene tape? The river was the suspect… That’s our parking space on the right)

Denis had just put on the burgers when a knock came to the door…. that’s unusual. A woman from the neighbouring (Belgian) camper was telling us that the police (who were just outside erecting crime scene tape…) had arrived to tell us all to move further away from the water for our safety. They (or maybe the water board) would be opening a dam tonight because of all the rain and there may be flooding!

The cooking stopped and everything got fired into a cupboard (except for the frying pan, it was still hot so I held on to it) and we started moving away from the water. We moved about 200m up the road, me with the frying pan still in my hand directing the reversing. Denis returned to the cooking and I retrieved the things from the cupboard.

(At least the ducks are happy)

Later that night I realised all the cars during the day were checking out the river, it’s probably not normally so high or so fast flowing. The cars continued to visit and so did the police but I fell asleep without too much trouble. But then at midnight… I’m awake, wide awake. Every sound is the sound of a river flooding and taking the van and us off to Lisbon… and not in a good way. I eventually got up and made myself a calming cup of Camomile tea while silently repeating that’s just a thought, that’s just a thought. Last time I looked it was 2am and then the alarm went off at seven.

While I’m feeling a little tetchy with the tiredness I am grateful we weren’t transported to Lisbon, Mairead.

I live in Ireland☘️ and sometimes travel with my husband in our motorhome. In April 2022 we will be visiting France, Spain and Portugal. I will be writing here.
View all posts by Mairead →
This entry was posted in Blogroll, Travel and tagged all is well, being present, camper van, motorhome, nature, outdoors, Portugal, problems, rain, thinking, travel. Bookmark the permalink.
%d bloggers like this: