I’ve been on walkabout in our new town today, inspired by another exercise from the Creativity Workshop… The one where I meet me (or to be exact me from a parallel dimension) in a piazza in Florence. I’m sitting there in Florence having a coffee while I write in my journal and along comes me. We have a great chat about the differences in our lives. There’s not many differences, actually, but there is one big difference. Love. 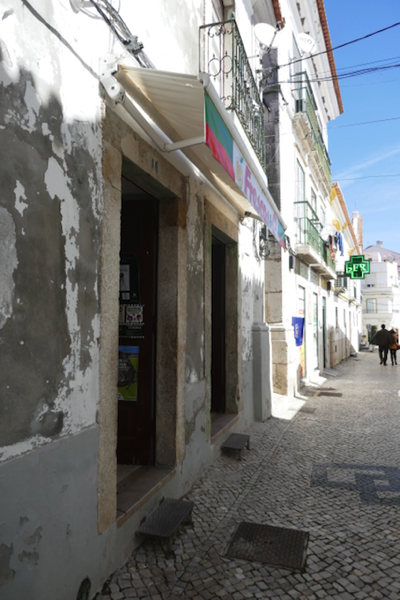 (Can you see the cute metal steps into this grocery shop?)

(This is a statue of Pedro Nunes, he’s a famous mathematician, google him. He was born here)

It turns out I was disrespecting my amateur status. The dictionary (well the apple dictionary) says amateur is a person who engages in a pursuit especially a sport on an unpaid basis. Or more cruelly, a person considered contemptibly inept at a particular activity. Fortunately, these are not the only definitions and last week at the workshop I got the definition that best suits me. The me that lives in this parallel dimension (note: anytime you think this is weird remind yourself, nothing weird is going on here…) An amateur is someone who does what they do for the love of it and not for financial gain. Me in the other dimension (note: you know what to do) has embraced this definition. She does what has to be done to bring in enough money to survive and then she nourishes the idea she loves. She still has fear but that does not stop her. She has dropped giant expectations and instead enjoys the giant excitement of surprises.

(Ciara! Fred has a Fred in a parallel dimension sunning himself here in Portugal)

So this morning after breakfast (and after doing the jobs that have to be done) I went off to meet the other me at a cafe by the river. I brought my journal and I ordered a coffee. She’s a great listener. She understand me, she doesn’t judge me, and I think she might even like me. I wanted her to tell me what to do now, this minute, to move my latest idea along faster but she wouldn’t. She reminded me of the slow gestation period. So I got a bit irritated with her. She didn’t mind, she just looked at a seat two tables over. I followed her gaze.

Right so, we have to jump back here. To the Interview exercise. You remember Virginia? From a couple of days ago? She of the great story? I know I haven’t told you her story and it’s not ready yet but I will tell you as soon as I can. For now you just have to remember that I was interviewing Virginia and the process of temporarily becoming Virginia had a huge (maybe even profound? no, too pretentious, remember expectations? huge is grand) impact on me. Well that’s kinda my latest idea. (Are you keeping up? Should I set up a help desk?) Can’t go into details about the idea as I’m honouring its gestation period. Suffice to say it involves interviewing people… Got it? 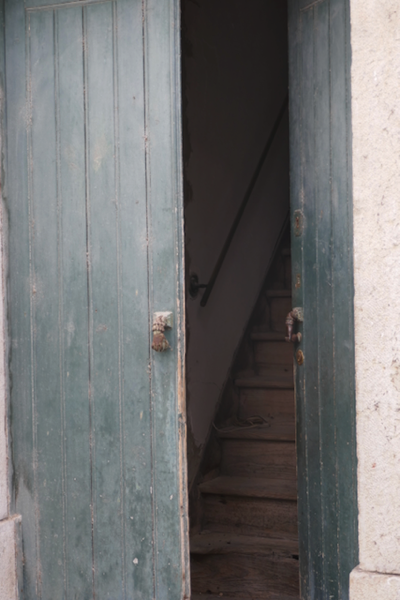 Me: I can not interview him!

Me (from a parallel dimension):  Still says nothing…

Me: What if he doesn’t speak English?

Me (from a parallel dimension): …silence

Me: What if he thinks I’m selling something?

Me (from a parallel dimension): …silence

Me:What if he thinks I want to be his friend?

Me (from a parallel dimension): …nothing

Me: What if he wants to be my friend?

Me (from a parallel dimension): …nada

Me: What if he expects something?

Me (from a parallel dimension): What if he doesn’t?

(I love the way this door is shedding its skin)

I can hardly believe what happened next… I picked up my bag and phone, I got up and went over to the young man and after confirming that he did indeed speak English (he was bilingual! Portuguese and English! I’m not joking) I told him about my idea. He talked to me. He didn’t expect anything and he didn’t want to be my friend.

This is me enjoying the giant excitement of surprises. Mairead.

I live in Ireland☘️ and sometimes travel with my husband in our motorhome. In April 2022 we will be visiting France, Spain and Portugal. I will be writing here.
View all posts by Mairead →
This entry was posted in Blogroll, Travel and tagged Alcacer do Sal, all is well, baby steps, camper van, courage, creative idea, expectations, fear, ideas, just do it, little things, motorhome, photography, Portugal, story, surprises, travel. Bookmark the permalink.

2 Responses to Expectations and Surprises