(There was an amazing sky last night)

We went driving around the countryside today. That wasn’t the plan but that’s what happened. We woke early and my plan was to go take pictures at the beach 2km down the road. Off we set at 9.30am and we were still driving at 10am. We missed the turn. We arrived at a golf resort, a very pretty gated community. We eventually did find the beach and I took the pictures and then we returned to the town with the castle, Alcacer do Sal. 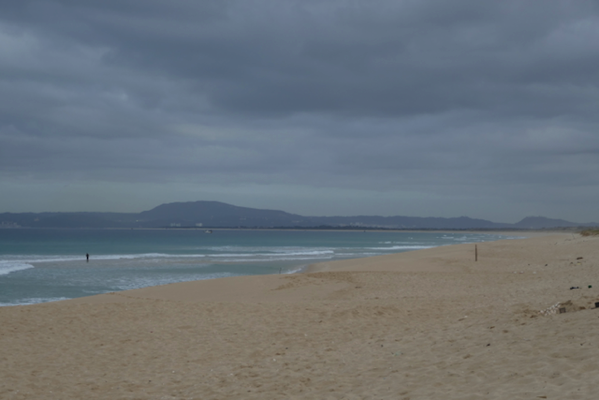 (The beach at Comporta)

We planned to stop at the free aire in the town but it was closed off, possibly for some festival or market for Easter. We had a coffee by the river to re-group. The coffee I like is an Americano but I have not (until today) known what it’s called in Portugal. I have managed to order it each time using hand gestures and knowing the word for water and milk (with extra nose wrinkling for no milk, thank you) The very happy cafe owner told me, without using any English, it’s called solo. I will need to road test this at another cafe but for now I think it’s correct.

We found a new place to go. A barragem. That means a dam, seemingly there are lots all over Portugal and they usually allow overnight camping. We drove for about 30 minutes from the town and then pulled off onto a narrow road and arrived at a place in the middle of nowhere, buzzing with camper vans. There was a cafe and even toilets. When Denis turned off the engine and I opened the door the sense of peace was huge. I went off to soak it up and take pictures and Denis started work. When I got back it turned out there was one thing missing… internet.

(Pretty flowers at the barragem)

We said goodbye to the neighbours from the Netherlands who had great English (and German and Spanish and probably Dutch…) naturally. We’re in a new town, there’s a castle 20 minutes walk away and a cafe approximately 70 meters away. It’s not as peaceful here but it does have internet.

I live in Ireland☘️ and sometimes travel with my husband in our motorhome. In April 2022 we will be visiting France, Spain and Portugal. I will be writing here.
View all posts by Mairead →
This entry was posted in Blogroll, Travel and tagged all is well, baby steps, barragem, camper van, coffee, internet, little things, motorhome, nature, peace, photography, Portugal, solo, travel. Bookmark the permalink.
%d bloggers like this: