(Very close up of ice on the bike seat, northern Spain)

Well wouldn’t you know it, I talk about taking photographs and then I completely stop taking them (it’s cold out…) Instead I’m doing something I’ve been meaning to do for a long time. Cut and paste photos together. Not sure how to do it yet. Well I can do it with a scissors but I’m not sure how to do it digitally. So I’ll give that a go and add the results here.

Hmmm, I find technology very frustrating… Probably shouldn’t blame technology though. I expect it to work a certain way and am disappointed and frustrated when it doesn’t. In this case I don’t have the right software to do the thing that would be a doddle with a scissors and paper… If I had a colour printer here I could do that. I always expect technology to work faster too. Learning how to use it is not part of the plan. So I’ll try something else…

This is not very satisfying, I must admit. Maybe I’m going too extreme. On the next one I’ve moved the balance dial just a little and now it’s possible to see the house lights in the distance. So maybe that’s the trick – small balanced changes. 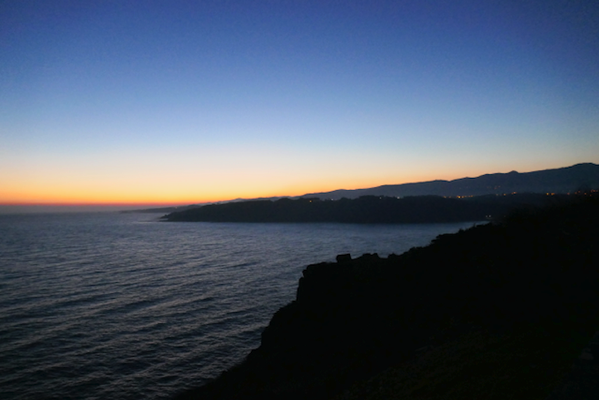 (Sunrise at the lighthouse northern Spain)

Might be time for us to move on, the pigeons are starting to think we’re a fixture here. There’s one looking in the window at me and another tap dancing on the roof.

From the pigeon fields of Serpa, Mairead.

This entry was posted in Blogroll, Travel and tagged just do it, little things, nature, Portugal, travel. Bookmark the permalink.
%d bloggers like this: