We are still in Portugal but moving every day. The day before yesterday we stopped off in the city of Viseu. Denis did some work while I went off to find the funicular to the old town on top of the hill. After getting a little lost at the bus station I eventually found it. It’s completely free and probably makes the steep uphill journey easy…

(View from the station at the top)

Unfortunately, it wasn’t working. I walked up. Probably better for me. At the top there’s a cathedral and a couple of museums, tourist office and restaurants. It was lunch time so I resisted a very tempting ice cream shop (nata ice cream?) and went back to the van. We couldn’t stay in Viseu because we needed electricity so we set off for the next place after lunch.

Our next stop was in a small town called Celorico da Beira where the town provides free electricity, for which we are very grateful. Thank you. This town is also on top of a hill and has a castle and walls! But no funicular. I went to have a look anyway. We were parked in the old part of the town and all the houses there are made of stone. We had got used to seeing houses painted white all over the country. Remember I mentioned the variety of Portugal? Well I don’t want to keep going on about it but it’s hard not to. This area is like nowhere else we’ve been in Portugal. It actually reminds me of the Rock of Cashel in Tipperary but on a much bigger scale. There’s outcroppings of rock everywhere for miles and miles. So I suppose when they were building the houses they used what was most plentiful – stone.

(Here you can see the stone houses and how narrow the streets are!)

Only a tower remains of the castle and of course the walls around it. I was hoping to climb them but I have a new requirement for walls – railing. I learned this requirement the hard way. I have no trouble going up a staircase – because I’m looking up. It’s only on the way down – looking down – seeing the ground so far away and so easy to get to (but not in a good way) makes me a little dizzy. But I didn’t have to climb the un-railed walls because I climbed the tower instead. I wasn’t expecting a ladder at the top though…

(Here’s the view of the new part of the town from the top of the tower. Can you see the old walls?)

In the summertime they charge €1 to climb the tower but at the moment it’s free. Thank you. There’s a steep staircase on the outside, then two more steep staircases inside the tower and then a ladder. Yep, a ladder. It turned out to be much easier than an un-railed staircase because you never have to look down on a ladder… 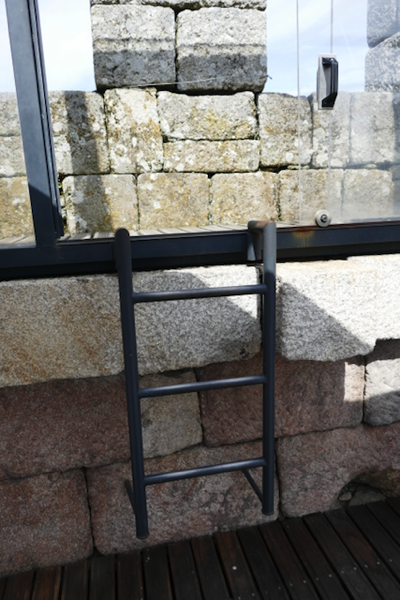 (That’s the ladder on to the walkway at the top of the tower. I know it’s tiny and firmly attached to the wall but it’s very high up!)

This entry was posted in Blogroll, Travel and tagged Celorico da Beira, motorhome, Portugal, travel. Bookmark the permalink.
%d bloggers like this: