We crossed the border into France on Saturday and stayed at a French vineyard that night. We thought it might be nice to do a wine tasting and then stay the night but wine tasting happens on Monday to Wednesday and this was Saturday… We had forgotten the France way of life. Everything has a time, if you want lunch at three… you will be hungry. This is good, we will get back to normal quicker now. We stayed the night anyway and availed of their lovely shower and fine electricity, all for €6.

(Probably not a great parking space)

Next morning we were on our way to Saint Palais sur Mer to visit our friends. The previous day had been spent on motorways and we were determined to see some green French countryside. And we did, in fact it felt like we had moved location to the 1960’s. It was a beautiful sunny Sunday as we passed through crumbly stone villages and agricultural country – mostly vines but also grain crops, like oats and barley. We drove through a small town called Cadillac and there was an old car rally with ancient Peugeots and Renaults and Citroens. Their drivers dressed up and smiling broadly as the wind whipped what hair they had, in all directions. 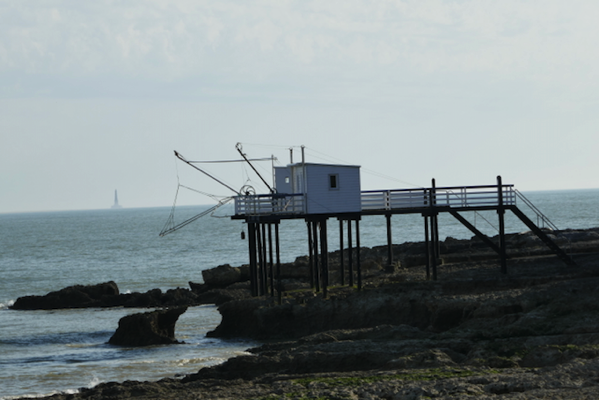 We arrived at A&J’s house at 3.05pm only five minutes late. Great, almost normal. We unloaded ourselves and our washing and proceeded to wash everything. Aren’t friend’s washing machines great? We went out to dinner that evening by bicycle. There’s a great bicycle path all the way to a great restaurant forty minutes away and I got to use one of their electric bikes. It was fun. Denis had to ride his bike… it was a little rusty from sitting on the back of Ruby in the rain. The brakes were making a strange noise which was very effective in keeping the pedestrians off the cycle path. It was very funny… well, three of us thought it was very funny.

(Breakfast… before the food arrived)

Next morning we had coffee and a Jaffa cake in bed! It’s what happens in their house and that’s before breakfast. While we were waking slowly and acclimatising, J cycled to the town to queue at the boulangerie! Breakfast was a feast of strawberries and cherries, porridge and muesli, croissants with two different kinds of bread, juice, coffee and tea (mint with milk, strangely.) I did get a picture of the table laid but I couldn’t manage to stop myself eating long enough to get a picture of it filled with food. 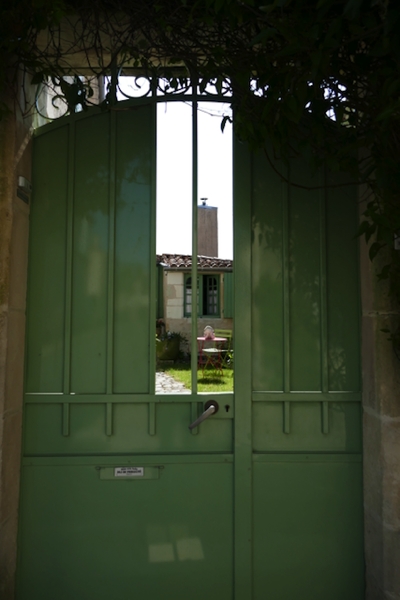 (Secret garden at the arty town)

After breakfast we went to visit a very pretty town (they all seem to be very pretty) Mornac near the marches. Even the car park (grass underneath and trees overhead) was pretty. There were loads of arty shops and galleries and nice things to photograph. That night we walked along by the sea to a different restaurant where we ate mussels and watched the waves.

(Our mussels restaurant. We had seats at the railing near the corner on the left)

We had a long drive next morning to Mont Saint Michel so we set off early. Nah, we didn’t… we had our coffee and Jaffa cake in bed and J cycled back to the town and we had the big breakfast again… then we set off. It was a lovely re-introduction to normal life. Well, it was if I can get Denis to cycle to Tesco for the fruit and croissants and nice bread and the Jaffa cakes… I suppose we’ll have to make up our own normal.

Ps Quick guide to going on a journey to Mont Saint Michel, tomorrow.