The beautiful animal park in Cléres

(The pink Flamingos and some random ducks)

I mentioned yesterday that there is a zoo here in Cléres and today we went on a visit. As it’s France, of course this would not be an ordinary zoo, this is a beautiful compact bird and animal park in the grounds of a château with it’s own Gothic castle and the remains of a medieval keep. And one more thing to thank France for – there was no entry charge today! Don’t know why. The zoo was set up over 100 years ago by Monsieur Jean Delacour. Seemingly he was a famous ornithologist (had to look it up: interested in birds) who worked for zoos around Europe and the US. His family was rich so… he got a château and started taking care of birds and animals.

(Even without the animals this is a beautiful park)

The majority of the birds and animals run (or waddle or bounce) free in the unfenced paddocks and seem unafraid of the humans who are very well-behaved walking along the paths and staying off the grass. Well they were mostly unafraid but I got in the way of three young antelopes, called black bucks, who were trying to cross a bridge and they looked very worried. I stayed very still and eventually they bounced off on their way. It really looked like they bounced, you know like when sheep jump over fences in cartoons?

(I have no idea what this guy is called, but he was munching away at bugs on his tree trunk when I took this. He’s about the size of a hamster with a long tail)

My favourite animal was the Red Panda, which looks like a cross between a fox and a teddy bear. Like the black and white Panda the red one has an extra bone in it’s wrist that helps it grab bamboo shoots making it adorable… A close second favourite was the Emu, his feathers look like hair with a parting running down the center of his back while his feet are very prehistoric looking.

(Here’s the Red Panda, can you see how he holds the bamboo branch? Awww!)

Up at the château there’s a pretty garden filled with flowers that I love. As I was taking picture after picture of blooms, one nicer than the next a butterfly caught my eye. He was perched on a big flower head and didn’t notice me walk round and round getting shots of him. I must have been there for 10 minutes and he was still there when we left. 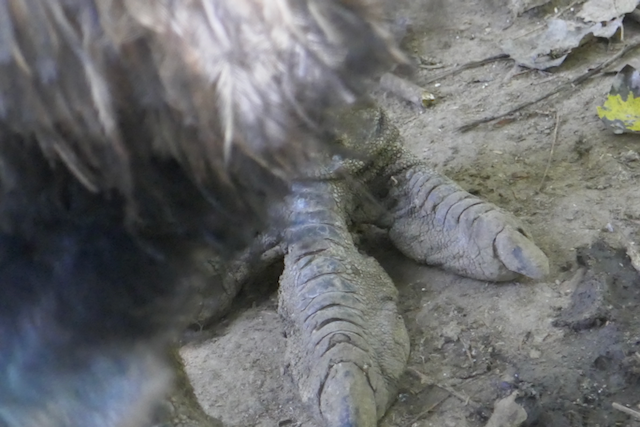 (This is a terrible shot but I wanted you to see how strange it looks… it’s part of the Emu’s foot – two of his three toes to be precise. His entire foot is about the size of my hand)

I’ll send you the flower and butterfly pictures tomorrow,  Mairead.

This entry was posted in Blogroll, Travel and tagged animal park, Cléres, France, motorhome, photos, travel. Bookmark the permalink.
%d bloggers like this: