(This crêpere has had a licence to trade since 1941 – that was during the second world war!)

It’s Sunday and a travel day for us. We are still on route to see Nancy and have arrived in another pretty aire. I tell you about it tomorrow but I have photos to share from yesterday for now. It was lunch time when we left the zoo so we decided to do what the French do – have lunch. By that I mean have our main meal in the middle of the day and since we had saved on the cost of entry to the zoo we were practically getting that for free too… does it show that I never did accountancy?

(I love the blue)

The cafe I called into on the previous day was also a crepére so we stopped there and had a look at the menu. One of the galettes (which is a wholemeal flour savoury pancake) that caught my eye was called La Bray Normandie with apple, Neufchâtel, ham and mushrooms. I wondered aloud what Neufchâtel might be and a young girl sitting at the table beside us told me! I couldn’t help overhearing, it’s a cheese, local to Normandy and it’s produced in the shape of a heart! I love hearts! 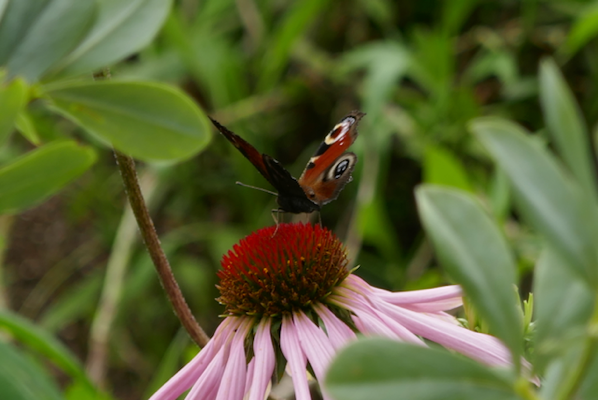 Our translator was from Bulgaria with perfect English and as far as I would recognise, perfect French. She has been living and working in Paris for the past five years. She and her boyfriend love this area of Normandy are were on a visit for the weekend. She described Neufchâtel cheese saying it was like camembert but not as strong and when her lunch came she offered a taste of her boyfriends cheese sauce because it was camembert… and it was good. Her boyfriend was French (and very generous with his chips and cheese sauce) and had visited Connemara. He loved it and of course we told them how much we loved France.

And when my galette arrived it was the best I’ve ever had. The apple was slightly mushy and brown and it worked perfectly with the cheese and ham and mushrooms and the pancake itself wasn’t too dry or too thick, it was just right. I didn’t stop eating until there was nothing left on my plate.. so no picture. (Reminder to self: take a pause to savour your lunch.)

I’ll be looking out for that Neufchâtel in the shape of a heart, Mairead.

I live in Ireland☘️ and sometimes travel with my husband in our motorhome. In April 2022 we will be visiting France, Spain and Portugal. I will be writing here.
View all posts by Mairead →
This entry was posted in Uncategorized and tagged Cléres, France, motorhome, travel. Bookmark the permalink.
%d bloggers like this: