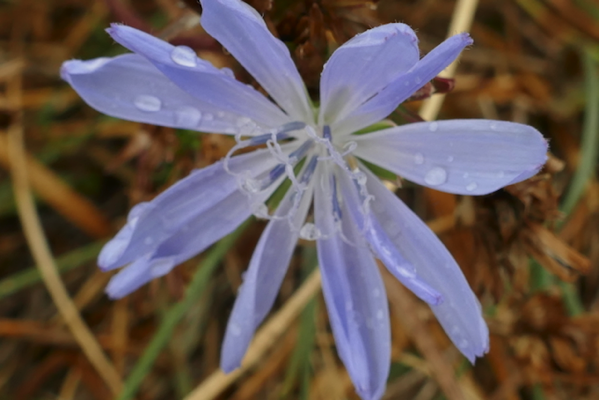 (Look a little flower on the Voie Verte)

We seem to have finally left the Voie Vert, the greenway on the old railway tracks. I am missing it. We are in a small village surrounded by vineyards now so we haven’t left the countryside but the pleasure of walking and cycling in amongst the trees, vines and vegetables is gone.

I hadn’t noticed until I travelled on the greenway that my feet wander towards where my eyes are looking. Well that explains why I am such a nervous cyclist in traffic. It’s because I have a knowing about my wandering and I’m concerned the motorist in the fast cars do not. There were no nerves on the greenway. A few cyclists had to ring their bells at me but they’re just not fast enough to kill me and I was out of the way in no time. 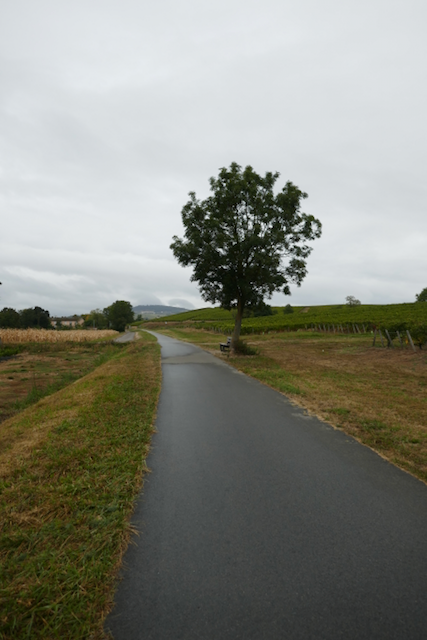 It’s possible I’m boring you with all this talk about this area and the greenway but I want to be sure you know how lovely it is. It is very lovely. Like, can you imagine, getting a flight to wherever the planes come to in Burgundy? Hang on I’ll google it….Ok there’s a flight on  Saturday 20th October at 1.10pm with Aer Lingus British Airways non stop return Dublin to Lyon, coming back on Wednesday 24th October for €159. Just the one carry on bag in that price so pack light – there was a great laundrette in the Super U in Prisse. Then there’s a train from the airport to Lyon and another from Lyon to Mâcon, takes 1 hour 43 minutes and costs €36. Then you’re on the Voie Verte! Oh hang on they’re still constructing the bit at Mâcon… hmmm, might have to wait until next year for that.

Ok are you still imagining? The thing is there are loads of these walks, like the one by the Canal du Nivernais, you remember where we met Valerie and Stewart and Laura and Ronan? And there’s one along the Loire, another along the Saône, there are two other canals, there’s one through vineyards and even one for thrill seeking cyclists (I’l be keeping away from that) called GTM. The map says there’s 1,000 Km of cycle routes (cycle means walking is ok too) in Burgundy. There’s a website and I think it’s in English (yes it is) called http://www.burgundy-by-bike.com. Even the pictures are lovely. You’ll have to imagine places to stay too. I’m imagining it for you and it’s really lovely.

I want to come back here… Mairead.

PS Two things: No, I’m not working for the Burgundy tourist board… and Booking.com have been sending me emails about Mâcon since I googled your imaginary flights… how do they know what we’re imagining?

This entry was posted in Travel and tagged Burgundy, cycling, France, travel, Voie Verte. Bookmark the permalink.
%d bloggers like this: