Where are we, now?

We’re in Beaujolais! Another day, another wine-producing region! But before I get into that I want to show you where we’ve been – Burgundy, on our map of France…

(This is a rough estimate of the location. You can see it is very close to Switzerland.)

There’s only so much information you can take in when you visit a country but if you keep returning you take in new things each time and you understand old things you heard previously. Now I know where Burgundy is… I think. You see, next time I visit, or maybe later today when I get into conversation with a French native, I might realise what I thought I knew was not in fact true at all! It happens to me a lot. Until I drew the circle on the map above I thought we were close to the south of France, when in fact we are closer to the north of France. 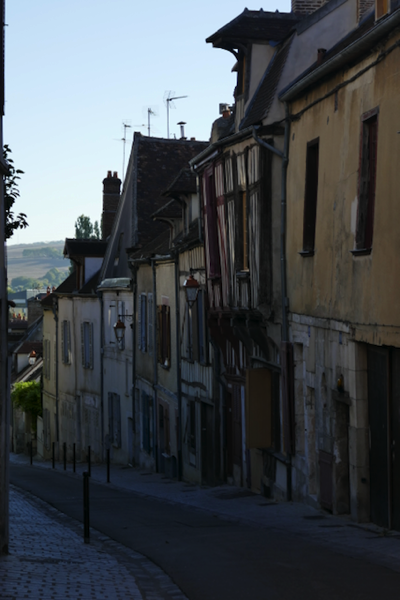 I’m reading a book at the moment about a fictional private detective in Berlin before the second world war. It’s written in English by an English writer (do you know, I could be wrong about that too, he might be Scottish?) and the detective gets beaten up a lot so I’m not sure I’d recommend it. Actually, I’m not sure why I keep reading it because the fictional detective is also annoyingly sexist but for all his/it’s faults I’m hooked. Anyway, at some point in the narrative the detective is remembering his time as a soldier in the first world war and in particular being in the trenches in Ypres.

(Swans landing on the river in Auxerre)

Well, we were at a really good war museum in Ypres last summer. The kind that has you fighting with your companion afterwards for no good reason other that you are so upset by what you have seen. (Yes, no, that doesn’t really seem good I’ll grant you.) Anyway, as I’m reading my fiction book I’m thinking, oh yes I know what that’s like, I saw the stuff in the museum. And then I remember…

(This lovely man, in Saint-Gengoux-le-National, had time to say Bonjour to each person who passed, including me, while repainting every crossing in the town)

All the stuff in the museum was from the perspective of the allies. From that perspective the baddies were the Germans. We all know the baddies were the Germans… weren’t they? But this detective (yes, fictional) in my book was German, he is the baddie, but wait, no, he was having a very hard time in the trenches, he was fighting for his life, surely that’s what I’d do… It’s only a fictional book and I’m not even sure I like it but just that one line about being in the trenches scrambled my mind. Things aren’t always as straightforward as they seem.

I think I’m right about that, Mairead.

I live in Ireland☘️ and sometimes travel with my husband in our motorhome. In April 2022 we will be visiting France, Spain and Portugal. I will be writing here.
View all posts by Mairead →
This entry was posted in Travel and tagged France, travel. Bookmark the permalink.
Loading Comments...
%d bloggers like this: