(Welcome. Settle yourself. We are in the vines… can’t you just imagine?)

Yesterday we were in Beaujolais and I am completely sure of that because we stayed at a wine farm and the wine they produce is Beaujolais! We had a lovely conversation with the farmer’s wife (in french! Denis’ french comprehension is coming along in leaps and bounds.) Her husband’s father bought the farm in 1959 and now there are three generations of the family involved in the business. They are not connected to a cooperative so they grow, press, bottle and sell everything themselves. They are very busy. 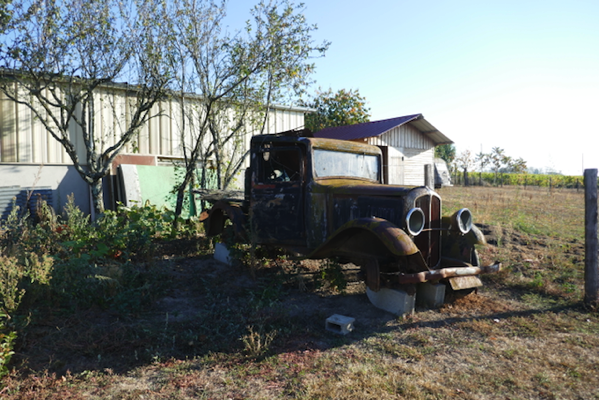 I didn’t get around to asking but I think the grandfather must like old machinery because the farmyard and camping field had lots of old tractors and farm machinery. Laid out really neatly, by the way. Well, they are French. They also had modern machines, one very like the funny tractor I saw trimming the vines in Prisse. Old machinery always reminds me of my childhood because from time to time my Dad would bring home old cars or motorbikes. I think they may have been in lieu of payment for services rendered at his service station.

(The man-made colours of autumn. Can you see there’s still a little piece of glass in the headlight on the right? and the one remaining tyre? and the number plate?)

One motorbike in particular was a favourite of mine and my brother’s because of it’s position between a wall and a shed we were able to climb on without fear of falling over. It provided no end of imaginary play. This french farmer’s collection reminds me I love the colours of rust and decay and the feelings they invoke.

(Can you see the opening to a tank, just above the Renault badge? Is it for petrol or water?)

As well as machinery there were hens! And a cockerel… who wakes at 7am. I was making Christmas cards (I’ll tell you next week…) in the afternoon when I first saw the farmer and his wife in the hen enclosure. He had a bucket and was on a ladder against one of the trees picking fruit. His wife was holding the ladder. The hens live in an orchard!

There are also nut trees in the farmyard and thanks to Stewart (from the houseboat) who taught me, I was able to identify walnuts. Whoever discovered them first was very persistent because it takes a lot to get to the tasty bit of a walnut. It’s very well hidden. 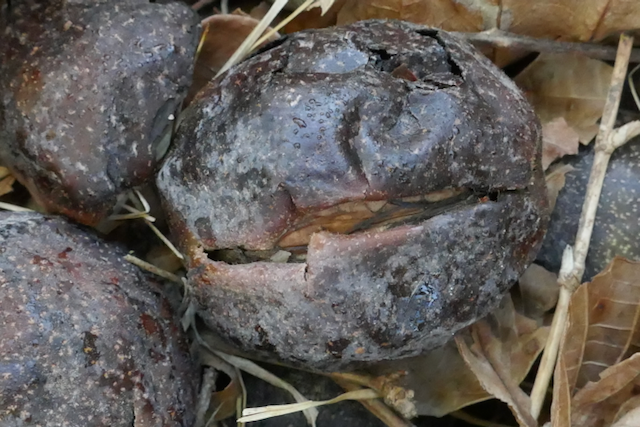 (This is what a walnut looks like when it falls from the walnut tree. Peel off the outer layer and you’ll find the shell. Crack the shell and you have a walnut!)

From Beaujolais (or nearby) Mairead.

This entry was posted in Blogroll and tagged France, motorhome, travel. Bookmark the permalink.

2 Responses to Rust and Decay