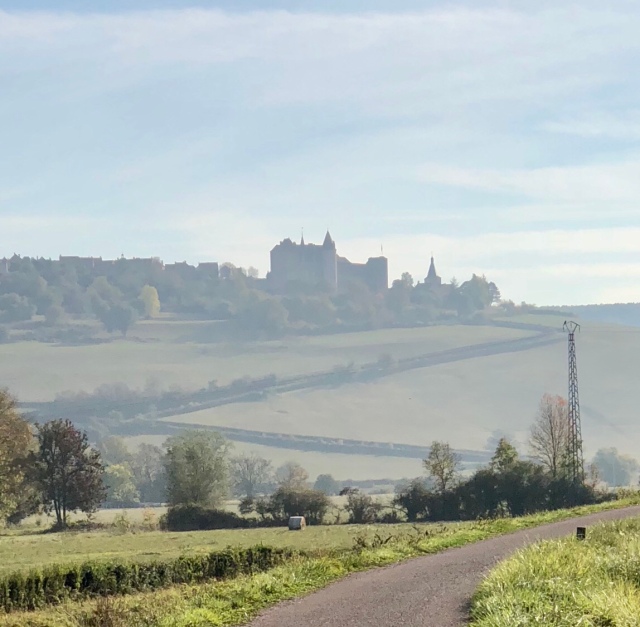 (Can you see the hedges zigzagging up to the château? That’s the road)

On Thursday morning after breakfast I left our spot beside the river to climb to the château. It was cold, about 8 degrees but the sun was shining. We were going to do French lunch again as the cupboards were still bare so I needed to be back by 12.30pm. the walk according to google would take 37 minutes, it was now 9.24am. I thought the 37 minutes might be a little optimistic so I was allowing myself an hour to walk up, another to walk down, leaving me with a visit of an hour. In the end google was very close and in spite of my puffing and panting and my stops to take pictures the climb up took exactly 40 minutes!

It was such a beautiful walk too, I still feel it now. The slight chill in the air. The colours of the trees. The ducks floating in the canal. The cows eating the grass. After eleven minutes I reached the end of my journey along the canal and had to start on the road that I could see zigzagging towards the château. As I climbed higher the sun felt hot on my back. The gentle walk along the towpath behind me I was pulling myself up the slope. There was the sound of the birds and a distant hum of traffic and something else – my heavy breathing. Fortunately there was no one around I needed to impress.

(Isn’t this seedpod beautiful? The road in the background leads to the canal)

The first manmade structure I came to was the château wall with a wooden door, into the garden, I guessed. The door was locked and there was no indication whether I should go left or right around the wall. By now, 10.04am, the sun was beating down and there was no shade and even an extra few meters in the wrong direction seemed painful. I went right and I was climbing again. But it was a good choice as I was heading into the village of Châteauneuf. From below it’s not clear that there’s a village up here but there is and it’s incredibly pretty. I passed one of the Logis chain of hotels, a pizza restaurant, guest houses and a man charging electric bicycles for hire. I wondered if I should try to negotiate a one way trip back to the canal later.

There was also a cafe with tables and chairs outside, you know the ones that look French? Made of metal and circular and painted green. It was open. Having made such good timing and having used up possibly a cake full of calories I went along in and had a coffee and cake…. yes it was only just gone 10am (9am in Ireland…) 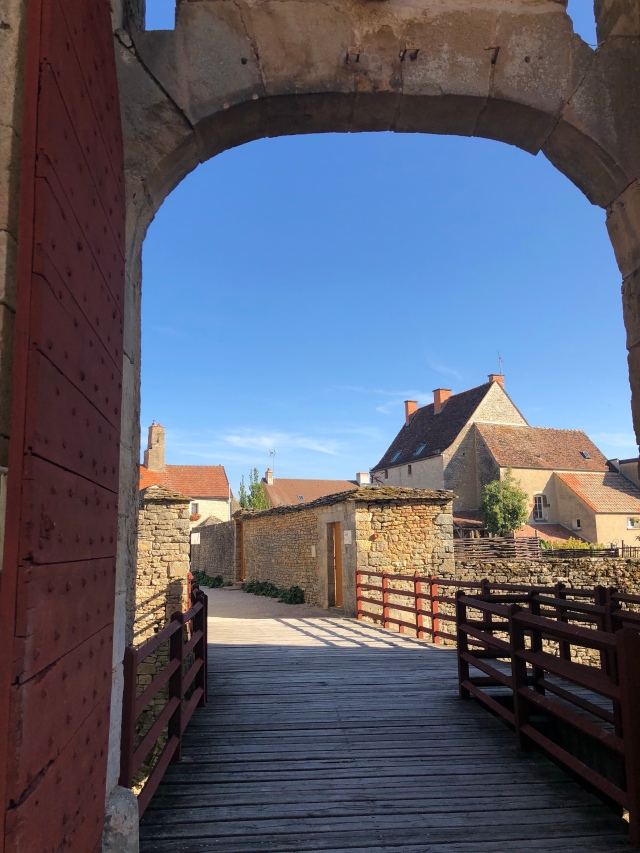 (Looking out the gate of the château into the village)

Fortified, I went along into the château and paid €5 for my ticket, well worth it especially for the story of the wife and the sugar dusted flans… So it was the Friday before St. Andrew’s Day in 1450 (or thereabouts) and Catherine of Châteauneuf put some sugar dusted flans on the window seat. (The sugar dusting seems to be important.) Her husband sits down to eat and disaster… he dies shortly after. Also dead is a young servant, Mariote. Everyone thinks Catherine put arsenic into the tarts to poison her husband, no one seems too upset about Mariote. Catherine ends up in jail and someone else gets the château. I don’t think she did it but if I’d known the story earlier I might have skipped the cake.

(I forgot to include the map last time… the red marker is where we were parked by the Canal de Bourgogne. Thanks google maps )

I spent an hour going around the rooms and buildings and then started back down, noting how much easier it is to walk down a hill than up.

I’m still wondering about Catherine and the flans, Mairead.

This entry was posted in Uncategorized and tagged Canal de Bourgogne, château, France, motorhome, travel. Bookmark the permalink.
%d bloggers like this: