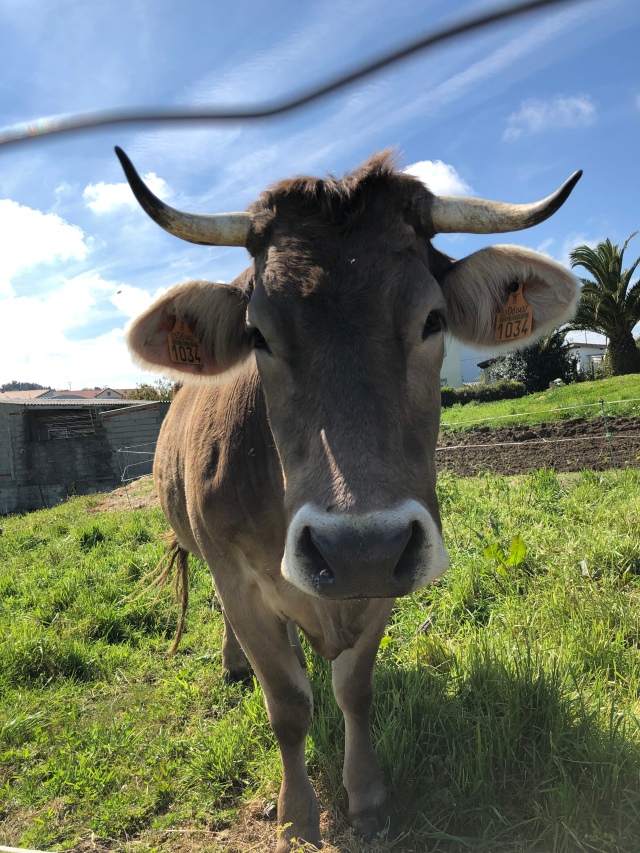 (Isn’t she adorable? All the cows have horns here. She seemed very friendly. The sound of her bell kept us company all day)

We are continuing our journey along northern Spain… slowly. We’ve reduced the driving time to an hour so Denis can work as normal. And we are zig zagging across the motorway (not as dangerous as it sounds) to spend a night near the sea followed by a night in the hills.

So last night was near the sea. 1.5km from the sea to be exact. We took down the bikes at 5pm and it was a lovely, mainly downhill, ride to the cliffs. Of course when it’s downhill on the way out it’s always uphill on the way back but we managed. We kept ourselves going by remembering the fitness goal might be getting closer. 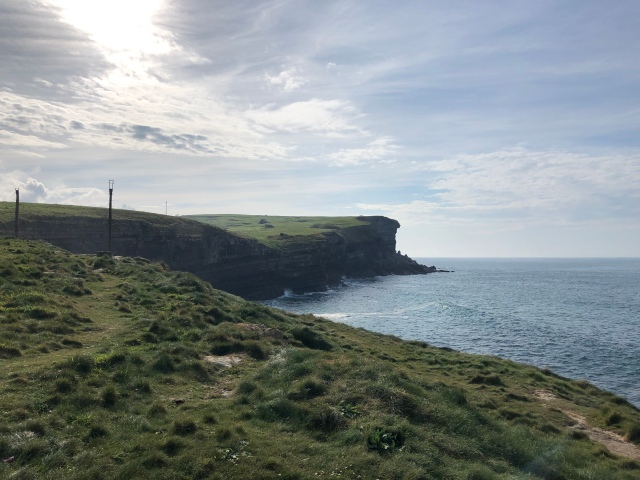 (Beautiful view at the end of a short bicycle ride)

One of the new routines I started at New Year was drinking celery juice on an empty stomach first thing in the morning. I was very attracted to its benefits. It’s a bit of a palaver washing the stalks, chopping them, mashing them in the blender and then straining the mush through a sieve bag but any habit gets easier if you keep going. I checked with Denis before we left that the solar power battery would be up to the job of running the blender and he answered in the affirmative. We’ve been married long enough for me to realise that yes definitely doesn’t always mean yes definitely to the question you just asked. In this case it meant yes definitely that might work…

(Doesn’t that look like a face on the cliff?)

Now we’re here and I have a blender taking up space in the cupboard and three bunches of celery (from Spain via Tesco Greystones…) taking up space in the fridge with no way of bringing the two together to make juice. I’m lying, whenever we are hooked up to external electricity I can run the blender. This morning we were hooked up and I washed, chopped and began to blend. That’s when I realised how loud a blender is and how thin our walls are and how many people were sleeping around us in their thin walled vans. Maybe it was just about bringing the celery home.

To Spain, I mean. Mairead.

(There we are just west of Santander in a town called Cóbreces. €12 got us parking, electricity, WiFi, toilet and shower)

I live in Ireland☘️ and sometimes travel with my husband in our motorhome. In April 2022 we will be visiting France, Spain and Portugal. I will be writing here.
View all posts by Mairead →
This entry was posted in Travel, Uncategorized and tagged camper van, little things, motorhome, nature, photography, Spain, travel. Bookmark the permalink.
Loading Comments...
%d bloggers like this: