After counting the tiles on the church we passed Porto’s huge produce market called Mercado do Bolhão. I mentioned in part 2 that it was being renovated. Then we passed the shop where the natas were being made in the window and arrived at Comer e Chorar Por Mais. Up until today I thought the name of the shop might be a trio of business partners something like Johnson, Mooney and O’Brien. It’s not, it’s much better, it’s literal meaning is Eating and Weeping for More. (Or the less poetic mouthwateringly delicious.)

The shop had been around since 1916, on Saturday we would be tasting port, six month-old cheese, 18 month-old cheese and thirty-month old cheese, three different cuts of very thinly cut cured ham, three different breads and olives in garlic. Everything was absolutely amazing. They age the cheese themselves and start by coating it in paprika. The premises was only tiny but full to the brim with interesting food and drinks. 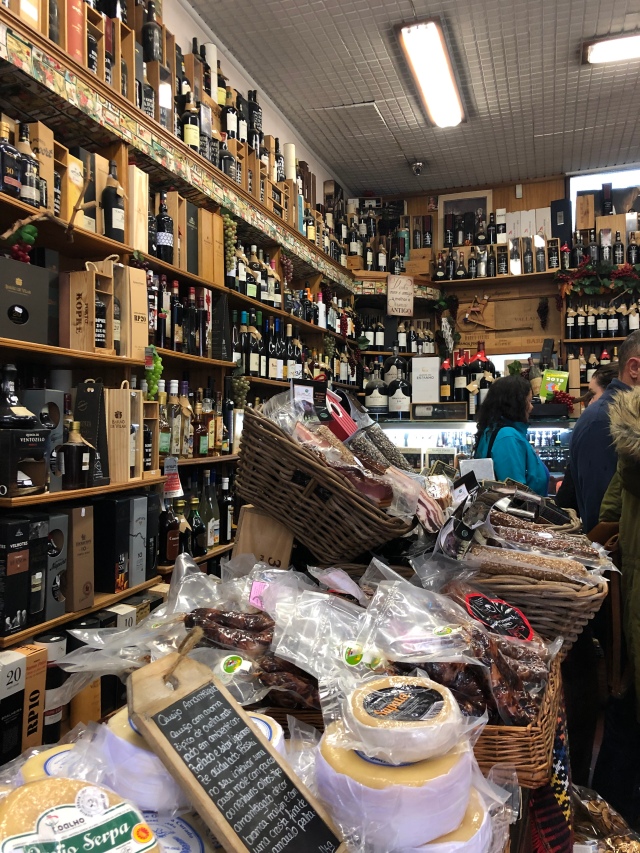 (Can you see the bottles of port on the top shelf on the left? Vintage. Vintage is my new favourite word)

The owners were very friendly and answered loads of questions in spite of also having to serve customers coming and going the whole time. While I was chewing on the Easter bread (a traditional bread filled with meats and cheeses before it’s baked, a treat at Easter after a meatless lent..) I noticed the port bottles on the top shelf. They were a similar (I mean exact) vintage to myself and over €700 a bottle. Everything in this shop appreciates age… I feel right at home.

I couldn’t spend too long appreciating my vintage because we were off to Império to sample some cod fish cakes. Isabel was telling me that the Portuguese have three main food groups, meat, fish and cod. She was joking but not about the fact that they really like cod. I was thinking that sounded a bit like our love of potatoes and the Bolinhos de Bacalhau combine both cod and potatoes!

Isabel described how her mother used to make them. First… I think the cod is cooked first, then remove all the bones. Then lay it on a cloth and fold over and roll back and forth again and again and again for a long time. This shreds the cod. Next combine with mashed potatoes, herbs and egg. Then take two teaspoons and shape into little rugby ball cakes. Finally, deep fry in vegetable oil. Or you could just buy them in Império where they make the best ones and serve them with a glass of vinho verde.

I live in Ireland☘️ and sometimes travel with my husband in our motorhome. In April 2022 we will be visiting France, Spain and Portugal. I will be writing here.
View all posts by Mairead →
This entry was posted in Travel and tagged food tour, motorhome, photography, Porto, Porto food and wine tasting, travel. Bookmark the permalink.
Loading Comments...
%d bloggers like this: