Silves is a lovely town with plenty of cafes and restaurants and two motorhome parks, €6 per night if you spend more than one night here. You might remember we were here last year, I’d been very brave and walked on the walls at the castle.

This year I’m visiting a couple of churches just outside the castle. One of them was very interesting and free. The other not so interesting and cost €1.50, which isn’t a lot to be honest. 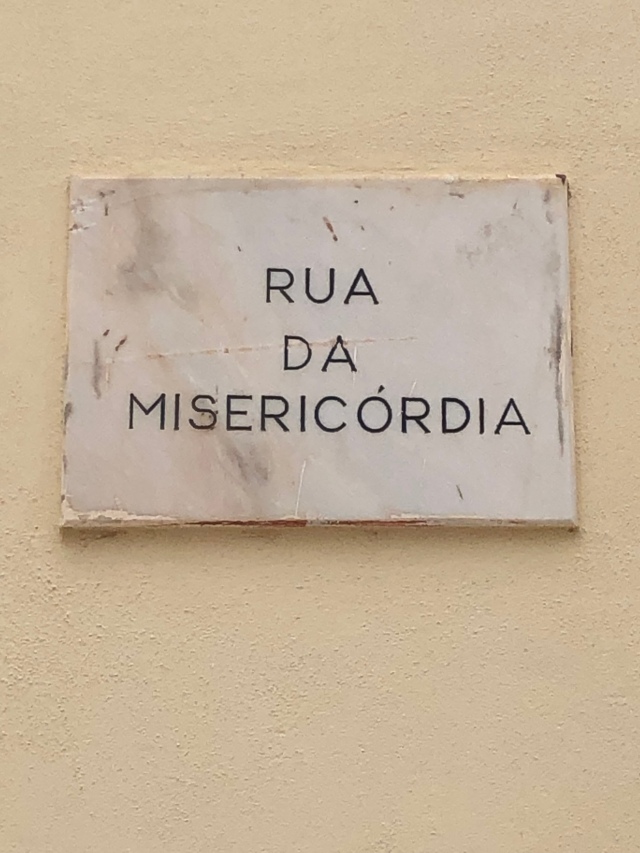 (The street of Mercy)

The interesting church began as the hall for a volunteer group called The Misericórdia (the long name, translated, is The Brotherhood of the Invocation to Our Lady of Mercy) that was set up in 1498 in Lisbon by Queen Lenora. She set it up because there was great need to take care of the poor in Lisbon at the time. You might remember this was the time when Portugal was discovering the new world. It was becoming a prosperous country and people were flocking to the capital to make their fortune. Unfortunately, prosperity is never evenly shared and this led to a huge problem with poverty and overcrowding in the city of Lisbon. The brotherhood later spread to towns and cities all over Portugal.

(Close up of the old town wall)

The brotherhood had a list of intentions and there were huge wooden panels depicting them on the back wall of the church. Namely, clothe the naked, give shelter to the pilgrims, give drink to the thirsty, visit the infirm, ransom the captive, feed the hungry, bury the dead. I loved the simplicity. In Silves they built a hospital and now 500 years later it still serves the community. With a crèche, nursery school, day care, nursing home, day center, long term care unit, home care, and a Social Canteen.

A funny thing happened in the 20th century, well I suppose it wasn’t that funny… There was a great tradition of people leaving money in their will when they died to the brotherhood at Silves. Unfortunately, they also including some stipulations that regular mass be said for their souls. What’s the problem with that? The brotherhood had to pay for masses to be said and it nearly bankrupted them.

I live in Ireland☘️ and sometimes travel with my husband in our motorhome. In April 2022 we will be visiting France, Spain and Portugal. I will be writing here.
View all posts by Mairead →
This entry was posted in Travel and tagged camper van, little things, motorhome, photography, Portugal, Silves, travel. Bookmark the permalink.
Loading Comments...
%d bloggers like this: