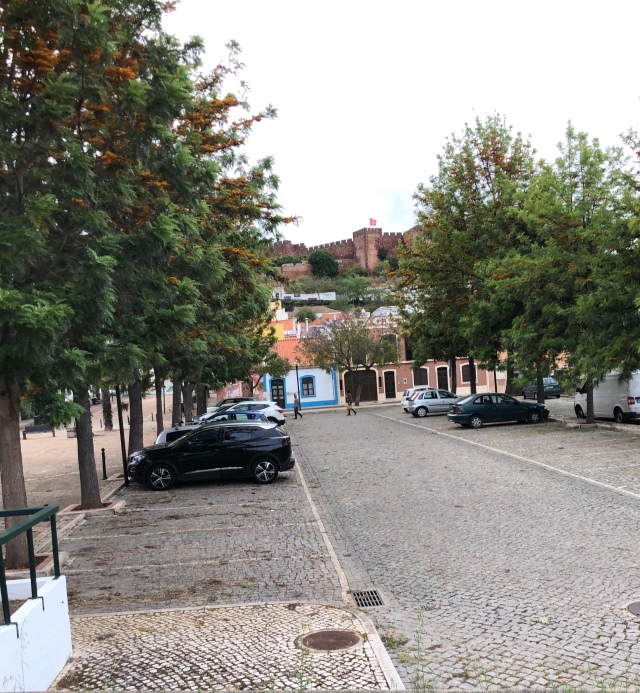 (A glimpse of the wall)

There are two things you see a lot of in Silves – the old moorish walls and the storks. Funny enough both are hard to photograph as you walk around. The storks are always too far away. So I had to stop trying and just watch them instead. The walls are surrounded by houses built in their shadow so there’s only a glimpse ever now and then of their red stone. 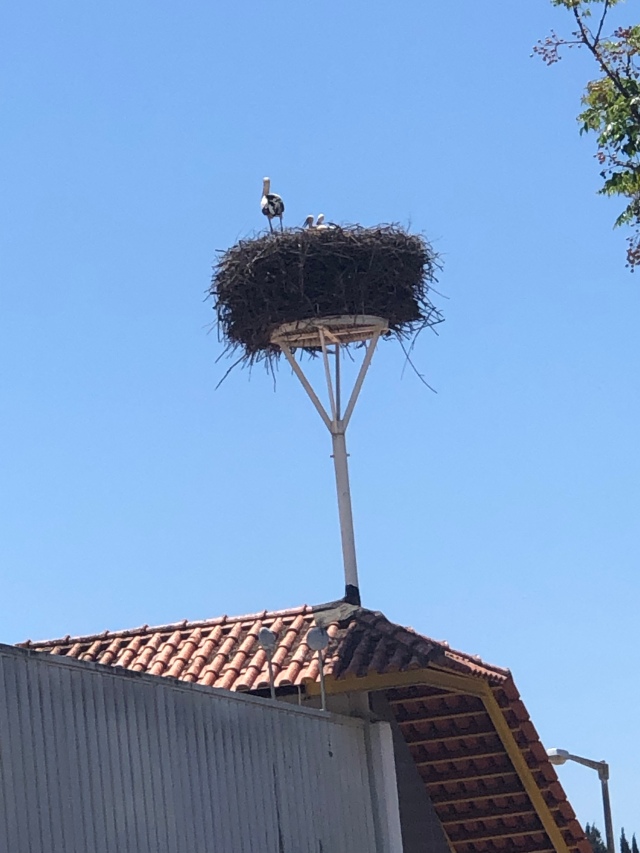 (Storks on top of the supermarket)

The storks build their nests on top of electricity poles or tall chimneys or on the corner of a very tall abandoned house. They are so graceful when they fly off to find food for their chicks. I think their grace is connected to their size, they have to glide everywhere to remain in balance. The ends of their wings are like long fingers and I think that’s what they use to change direction. When they have picked a direction their long legs seem to click back against their abdomen so that they are streamlined. 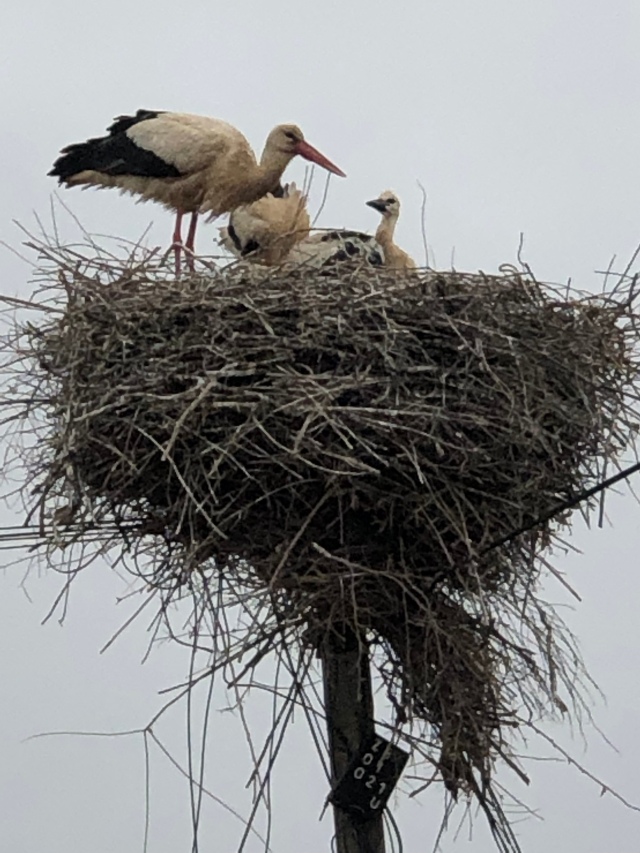 Looking at them from underneath as they fly over me I am reminded of an airplane tucking in the wheels as it lifts off. Whenever they do fly over me I am unable to even think, all I can do is stare up with my mouth slightly open and watch. It’s only afterwards I consider my luck at being in exactly this place as they pass by. 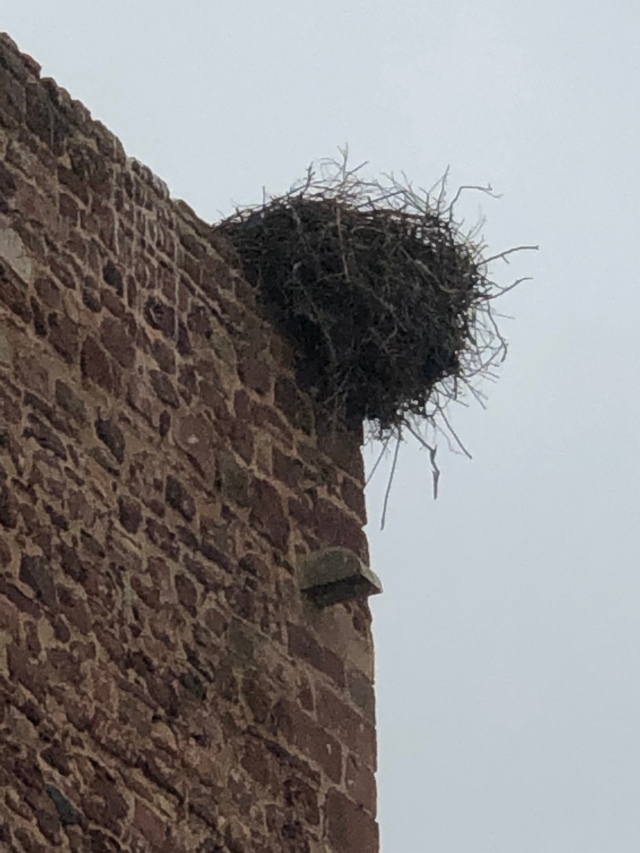 (On an edge of the old walls)

You will never guess what is happening as I write… we are parked beside a river today far away from Silves and a stork just walked up the river outside my window. It’s 7am there’s no one else around so I guess she feels safe to walk so close to the vans. Watching her now at such close quarters I realize why storks are so hard to capture on my phone. They are very, very wary. This one seems to jump when a smaller bird flies too close. She even seems to be aware of my watching. I am not moving a muscle, I am in the van and there is a window between us but she has stopped fishing and she is alert for danger. 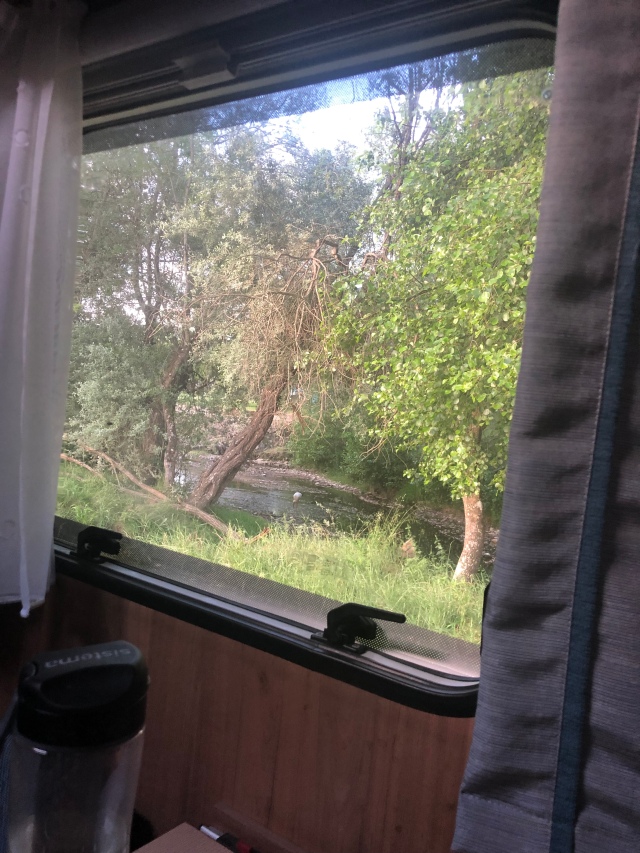 She started walking up the river out of my sight so I risked grabbing my other camera and sneaking out of the van and up the river bank. She didn’t hear me but as soon as I had cleared the trees she snapped to attention and rose into the air. I didn’t even get a chance to watch, I was watching my footing instead. When I looked up she was in the grass on the far side walking parallel to the riverbank. I had a clear view but she was far away from me. 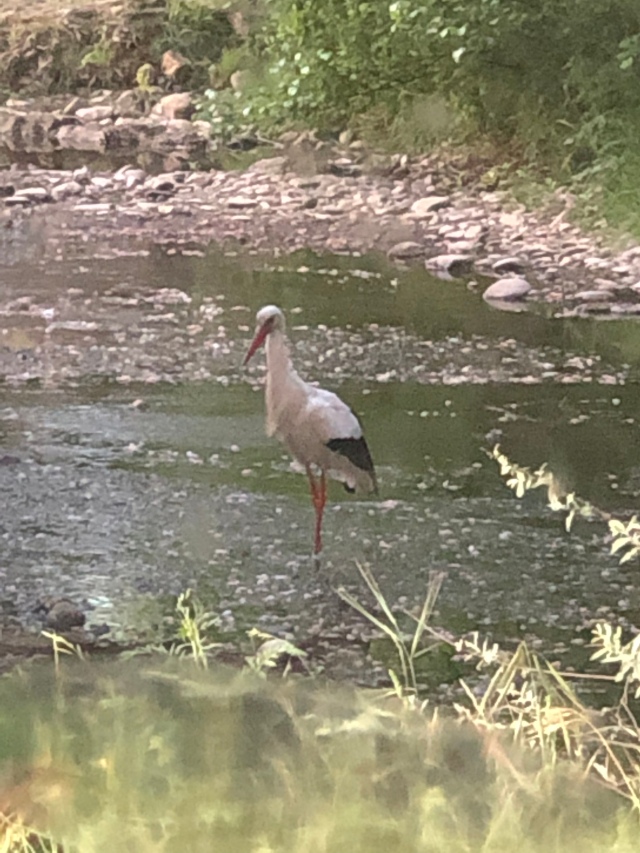 (Here’s a zoomed in one)

This is the closest I’ve been to one as they walk and they are not as graceful on the ground. Her legs are impossibly thin and her body so much bigger. So the balancing requires more jerky movements as she places one foot down, rocks her body back to be able to place the other as she steps, steps, steps through the grass. For some reason it reminds me of a documentary on television where the scientist is placing drops into individual tiny glass cylinders. Drop, lift, tilt, drop. 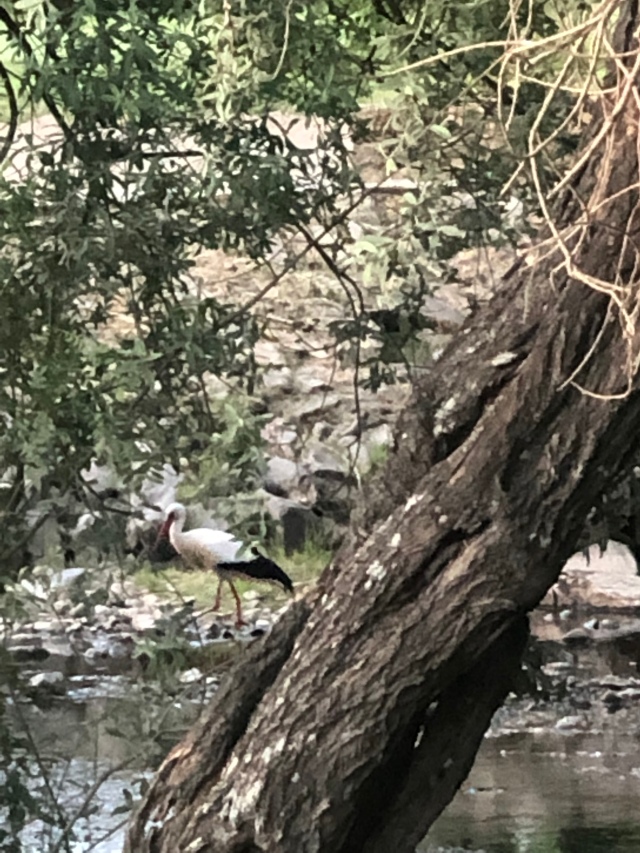