Storm After the Calm

Denis choose avoid toll roads on the sat-nav this morning. He had this lovely idea that we would ramble to our next spot through the glorious countryside. He imagined we would make stops as the humour took us. First at a cafe and then a supermarket and finally some shaded picnic tables. Lovely.

(Deck chairs and parasols, maybe we should park on a roundabout?)

Unfortunately it didn’t turn out so lovely. Every cafe we passed had no parking or was incredibly difficult to get into. We kept going. We came to a big town and I saw a sign for a supermarket. Go left, go left! says I. He went left. The sign lied. There was no supermarket… or if there was it was far, far away.

(The ducks have priority)

Never mind we’ll carry on, but the sat-nav was feeling a little poorly. She took us down a road so narrow they had put up signs sayings No Motorhomes. We turned around but she returned us again and again to that narrow road. She may have a bug…

Then we worked it out… this was the only road in our chosen direction without tolls to get us across the huge old Dordogne river. In fact we had to cross the river twice because it is so old it meanders around the place. Twice it meandered in our direction. There was only one solution… Denis turned off the avoid toll roads.

Very soon we were collecting a toll ticket at the ticket booth. Sometimes you just collect a ticket and later you pay the toll, the amount of which depends on how far you’ve travelled on the tolled road. When it’s time to exit the motorway you stop at the toll booth put in the ticket and pay. This time I put in the ticket and for the first time ever it said: ticket invalid press call button (or something like that in French.)

(Are you sure we can go this way?)

Ok so, please imagine you are at home and something similar happens and you have to press the call button at an unmanned toll booth. (Or better still you are at the train station and there’s an announcement.) Are you imagining? You press the button. Imagine the voice through the muffled speaker. They are saying, Ock do chee saery? What does that mean? You don’t know, do you? But because you are at home you expect they are speaking English and after a few attempts at, could you repeat that, please, you understand.

(Can we just go back to the calm?)

I had no idea what the voice in the call button speaker was saying. I asked, Do you speak English? The one word I could understand was No. She said the first thing again and for some reason Denis understood (he was at the far side of the van in the driver’s seat maybe the acoustics work better over there?) she was asking, in French, where did you pick up the ticket? (By the way, his French is definitely improving.)

Oh that’s easy, we were near Bordeaux (although this whole motorway is near Bordeaux) of course she couldn’t understand my version of call-button-speaker French. We were doomed to remain at her toll booth for ever. The line of cars behind us knew it too, they had started their backing away maneuver. 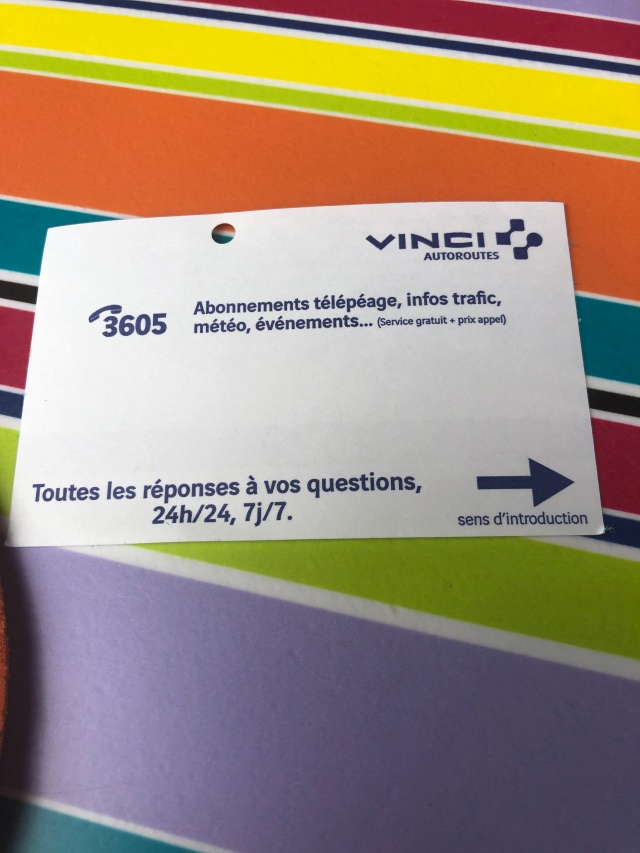 She eventually took pity on us and said something, who knows what but I did catch an revoir and so did Denis. He was thrilled, she didn’t charge us! But the barrier was still down and there was €8 outstanding next to the credit card symbol. I paid the toll, the barrier rose and we drove off. But we still had the ticket. We’ve never been able to keep a toll ticket before.

I live in Ireland☘️ and sometimes travel with my husband in our motorhome. In April 2022 we will be visiting France, Spain and Portugal. I will be writing here.
View all posts by Mairead →
This entry was posted in Travel and tagged camper van, France, French motorway, motorhome, photography, toll ticket, tolls, travel. Bookmark the permalink.
Loading Comments...
%d bloggers like this: