(That’s the door of the church)

We are (hopefully) on calm seas somewhere near the south-west coast of England if you are reading this on Thursday morning. There’s hardly a puff of wind and it’s very cosy onboard… but that’s tomorrow. Today, we are in Cherbourg in the camping car parking where we started six weeks ago. Remember? We had to empty the vinegar water from the fresh water tank. No such jobs today, instead we are waiting to board the ferry at 9pm.

(The back of the church)

(Can you see the replica paratrooper hanging up there?)

It was late at night June 5th 1944, 14,000 paratroopers were dropped out of planes over the area. They were part of the D-Day invasion. By sunrise the German troops had left or were dead and an America flag was flying from the town hall. One of the paratroopers that night was John Steele. He was a bit unfortunate, his parachute got stuck on the church steeple as he floated into the square. He had a knife to cut himself down but he dropped it so the best he could do was play dead while the fighting was going on all around him. He was 32 years old at the time. Eventually one of the German soldiers holding the church cut the straps of his parachute and dragged him up onto a tiny balcony. 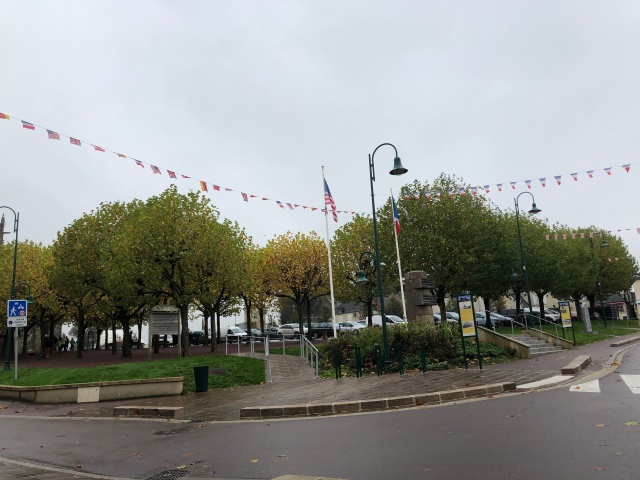 (Can you see the America flag?)

We’re in Sainte Mère Èglise because we need a boost of electricity, the grey days are causing havoc with our solar production. So while Denis got to work at the supermarket plugged into an hour of power for €2, I walked into the old village. It was buzzing. Villages in France are rarely buzzing on a Wednesday morning but this isn’t France.

Well no, it is… but it’s also a tiny bit of America. Everywhere you go you hear American accents, you see American flags. This village is a kind of showcase of how great America was. They were the heroes, everyone was grateful to them. They saved the day. It must be lovely. It is lovely. But it’s also sad. Mainly because you can still imagine what happened here, what happened all over France, all over Europe during the Second World War and the First World War. What’s happening still, in war. You’d think we’d learn, we humans, I mean.