We had a great night sleep. Very gentle rolling at 3am but otherwise smooth as a lake. We’ve just had breakfast, the highlight of which was the coffee. They must have a new machine… No the real highlight of the breakfast was the servers, they are always smiling.

We’ll be sitting around for the next six hours so I might as well tell you a story. 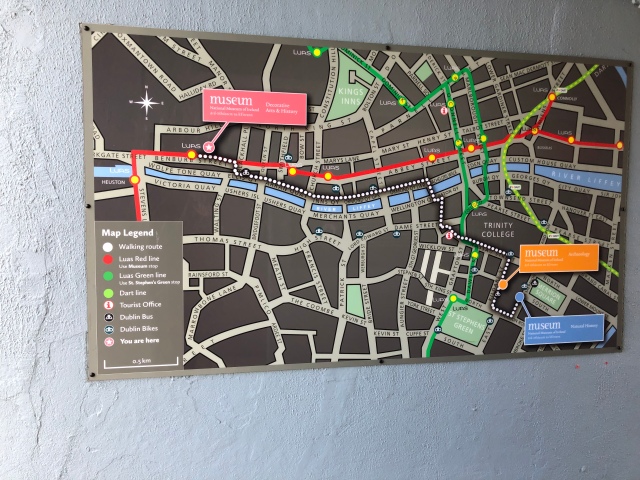 (Map of the National Museums in Dublin, all free entry)

About a month ago I decided to be waaay more organized preparing for this trip. I’d pack all my clothing early. I’d tidy the house and garden and I’d have neat little craft boxes with only a few crafting options to keep me focused while I was away. I thought it would make the last week easier – I love easier. As it turned out the last week wasn’t easier but the whole month was much more interesting than usual and I’m glad I did it that way but that’s a different story. This story is about a war museum.

On Wednesday morning this week I was right on track with the preparation and it even seemed possible I would have time to wash the kitchen floor (long overdue and a bit sticky to be honest.) Then my sister sent a text. She’d seen a video about an art exhibition in Collins Barracks which she knew I’d want to see. I did want to see it, I’d love to see it! It was opening to the public at 10am that morning and she didn’t know how long it would run. This might be my only opportunity.

Of course, I couldn’t go. The sticky floor. The meticulously planned day. The last few groceries. That bathroom could do with another run over. Plus there was a small possibility I could slip in two more craft projects under the bed in the van but only if I started unpacking the garage now. There was definitely no time for an art exhibition. 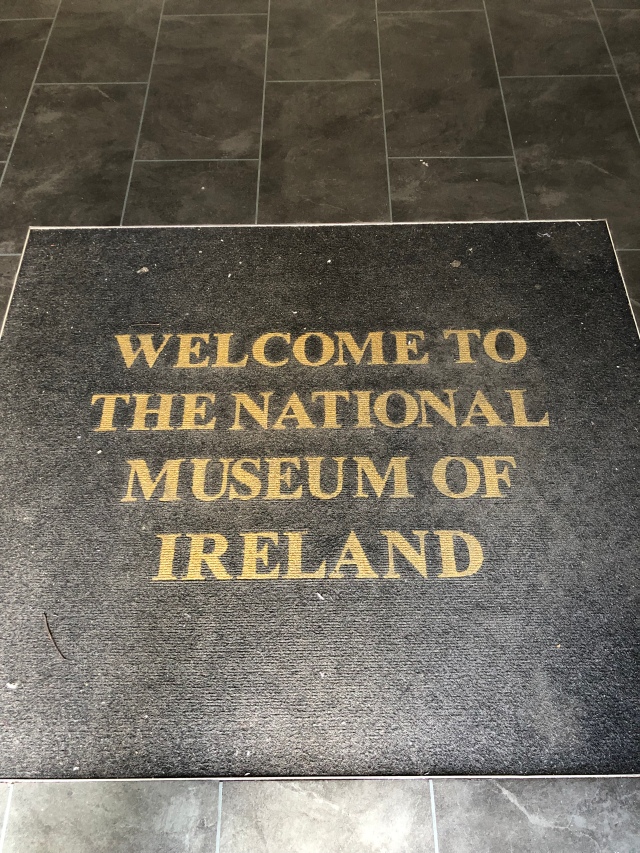 So I went to the art exhibition.

It was the right thing to do. I don’t exactly know how to explain it to you without expanding the story… How are you fixed for time? I have six hours to spare here.

Ever since I did an art course at BIFE (Bray Institute of Further Education) the story of how some women (a lot of women) were shamed and rejected by society in Ireland because they were pregnant and not married, was calling to me. There was a special place  these women were sent – Magdalene Laundries, commercial laundries where the women worked without pay. 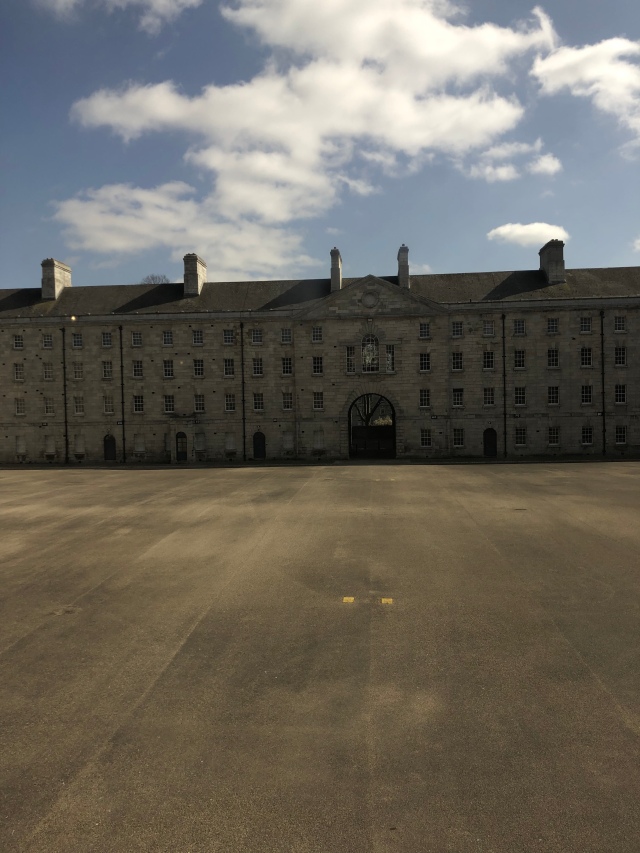 (One side of the courtyard at Collins Barracks)

At first I thought that you had to be pregnant to be sent to a laundry but orphans were sent there too. Sometimes when a woman died and her husband couldn’t cope he would send his children to a laundry or to the industrial schools. Sometimes speaking up for yourself or being a little different was enough to get you sent to the laundry. It was hard to get out and some women stayed all their lives.

I found the stories very upsetting. Something of the shaming of these women played into my own stories of shame. 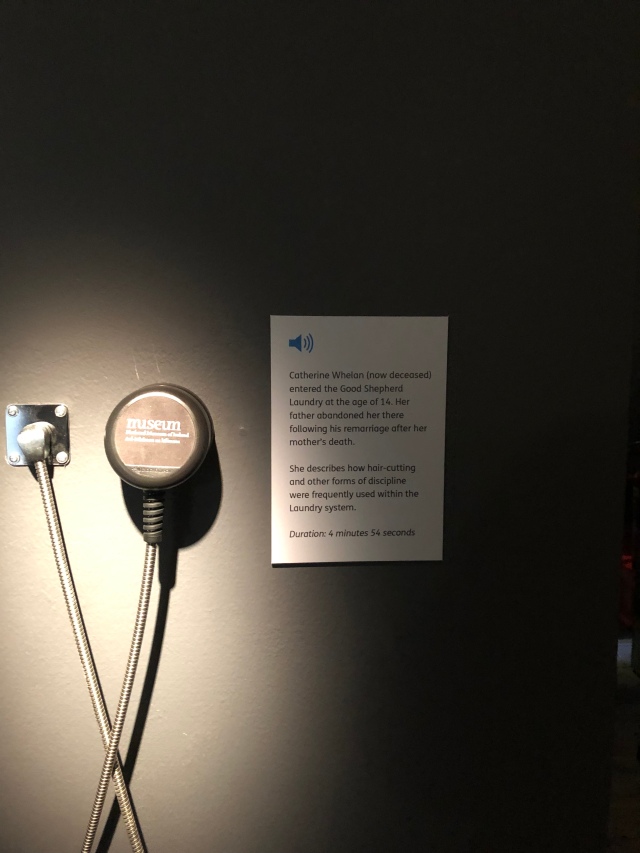 (There were recordings of Laundry women)

Fortunately I had an outlet on my course and I started making art pieces inspired by their stories. I made white porcelain aprons for the white aprons the women had to wear in the laundry. I made pregnant grubby aprons on the reverse of stretched canvases for the shame they endured. I made buttons, loads and loads of ceramic buttons, for all the buttons they must have sewn back on the shirts of Ireland.

After the course I wondered what I could do with the things I’d made, how I could share them. Could I make a statement with them? Weirdly my stories of not being good enough and not knowing enough surfaced and I did nothing. 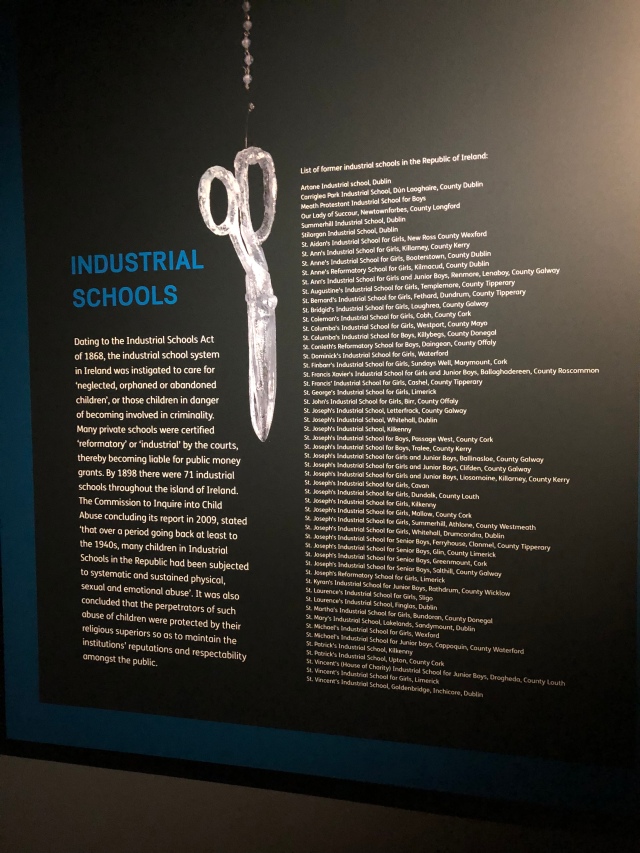 (A list of the Industrial schools in Ireland. I saw on this list that there was one in my home town. The scissors is made by the artist with glass)

Then last June my sister sent me a text (yes same sister, she’s lovely isn’t she?) to tell me there would be some of the women of the laundries going to the Lord Mayor’s house in Dublin. A committee drawn up by the government had gathered them together to discuss what they had gone through and to consider what could be done now. They would also be visiting the president of Ireland. This would be an opportunity for the public to show their support to the women. I went and stood on the footpath outside the mansion house and clapped and waved and cried. Something good happened there. Something opposite to pointing the finger and shaming. Ireland was different now.

Next morning I had an idea. Imagine if these women knew that Ireland had changed. You see most of them had kept their shameful secret. They had gone to London or America or Australia or somewhere no one would know what happened. They had started again. That’s the lucky ones, the others had died in the Laundry or were still there when they closed in the 1990’s and were moved to nursing homes. They had told no one of their time in the Laundry. How could they? What would people think of them? They didn’t know Ireland was different now.

It is different now, isn’t it? 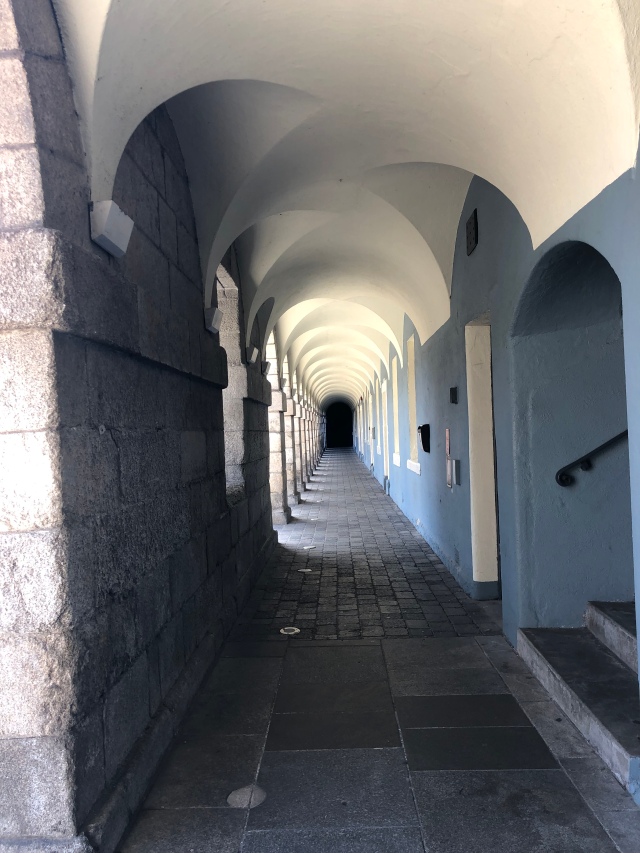 (Covered walkways around the courtyard at Collins Barracks)

I started a social media campaign. By that I mean I set up a Facebook page, a website, a blog, a twitter account. I posted and connected. I wrote to the minister of justice. I pestered friends to share. I sewed a load of buttons to safety pins and asked everyone to wear a white button in solidarity with the women of the Laundry. And then I went back to my normal life. I didn’t know what else to do. I want to believe we are a different more inclusive Ireland, I want to believe it. But I started to read about Direct Provisioning and I started to hear people complain about the media’s attention on the woman of the Laundry when they should have been paying attention to the pope. I started to hear people complain about hearing too much about the babies buried in a tank under an abandoned Mother and Baby home in Tuam. 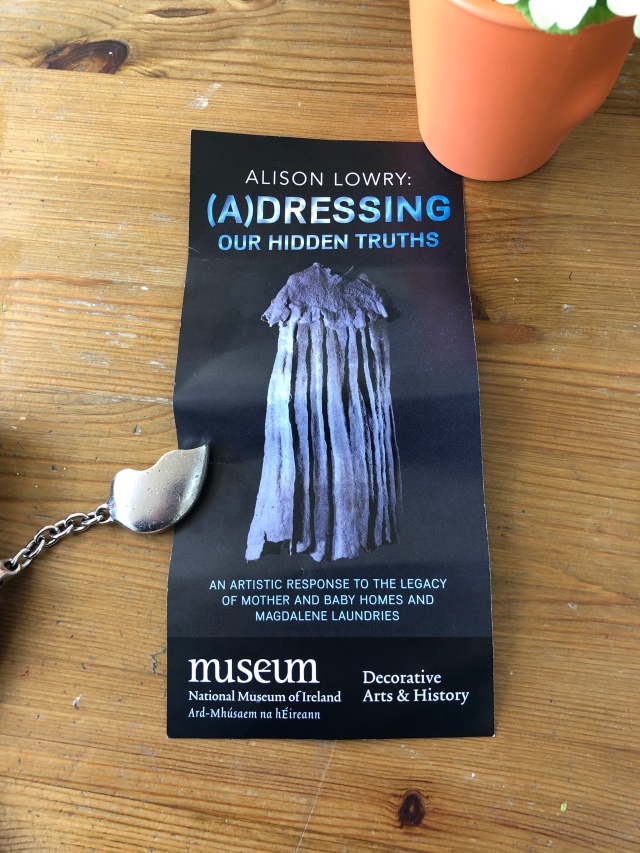 So on Wednesday I left the kitchen floor and went to see an exhibition where the artist, Alison Lowery didn’t let anything stop her until she finished her artist response to what happened in Ireland in the recent past. There’s a video by the artist explaining the exhibition, it takes 10 minutes, it’s worth it, listen. When I was leaving the museum I recognised the woman walking in. Without thinking I said are you the artist? She said she was. I mumbled the incoherent enthusiasm of a super fan, hugged her and went home. I will send her a link to this post as this is what I wanted to say: Thank you for having the courage and generosity to tell this story with your art. I’m a big fan of your work. More hugs. 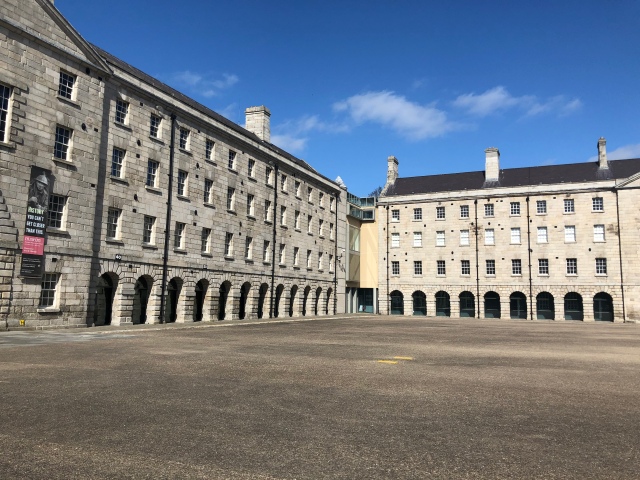 (A corner of the courtyard at Collins Barracks)

Well there’s a war museum in Collins Barracks. I don’t mean the war of independence, the war against British rule. I mean the war against our own. Against each other. Against women. This one will be emotional and there will be no one else to blame, there are no baddie armies. It’s just us. Against us. Please go, I think you can handle it.

(A)dressing our Hidden Truths. An artistic response to the legacy of Mother and Baby homes and Magdalen Laundries – Alison Lowery. Collins Barracks Museum Dublin. It runs for the year.

PS. Didn’t fit the extra crafts or tidy the garden but the kitchen floor is washed!

Pps: This year I’m going to use one of Denis’ apps (REGOapp.com) to help me show you exactly where we are. On the map above the yellow dots show Greystones, Rosslare Harbour, Cherbourg and Mont St. Michel.

I live in Ireland☘️ and sometimes travel with my husband in our motorhome. In April 2022 we will be visiting France, Spain and Portugal. I will be writing here.
View all posts by Mairead →
This entry was posted in Art Works, Magdalenes and tagged Art, Dublin, history, Ireland, Magdalene Laundries, mother and baby homes, shame. Bookmark the permalink.
Loading Comments...
%d bloggers like this: