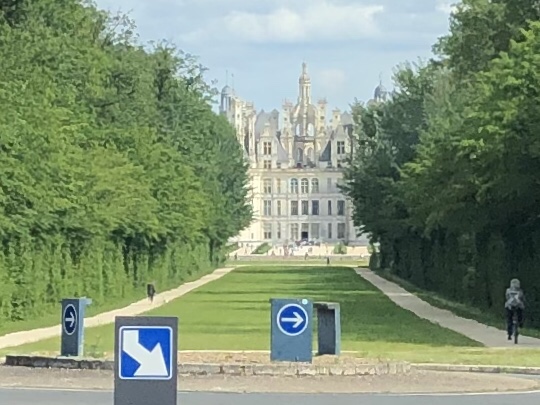 We drove for hours after we left the policeman in Fontenay-le-Comte through beautiful countryside. The avoid toll roads was on again but this time everything worked out and we arrived at my Château in Chambord. (Not actually my château but for eleven euro I can pretend.) 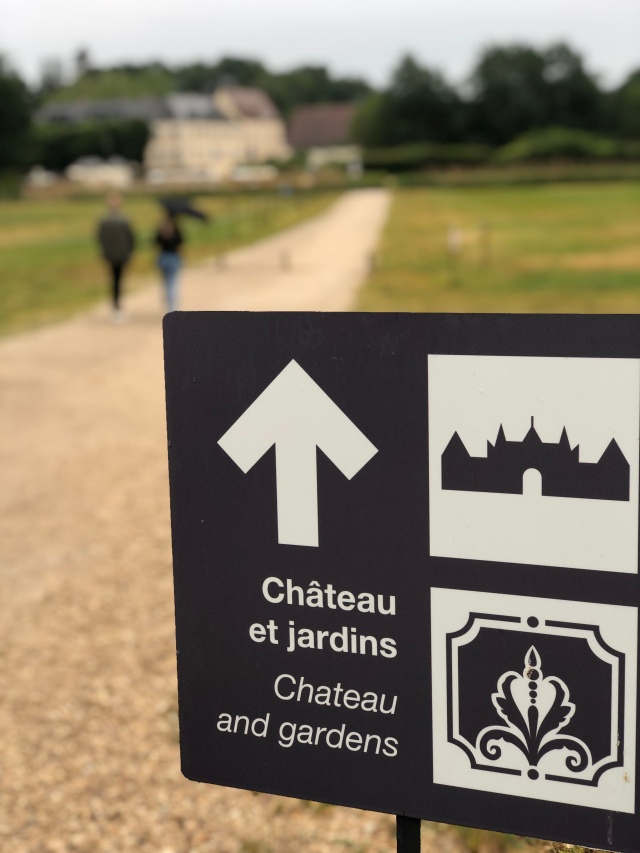 (This is how close we are to the Château)

It was after five by the time we arrived so we had a quick cup of tea and some emergency long life Portuguese tuna patê on crackers and then off for a walk around the grounds. It was still sunny but not too hot and the French were doing what they do on a warm Saturday afternoon – walking in a royal garden. This garden is full of wildlife, birds swooped and frogs croaked and there were signs telling us about the wild boar. It seemed like our breakdown experience had reset something. The long drive hadn’t managed to tire us and we walked enough to hit our step goals.

(You can walk, boat, cycle and drive golf carts around the grounds of the Château at Chambord)

Next morning I was on a mission… I had been reading old reviews about the motorhome parking at Chambord Château and one of the reviewers was complaining about the early morning noise from the balloons… the hot air balloons. There were balloons? Wouldn’t that be amazing? Years ago I had seen pictures of colorful balloons flying over the countryside in France and the image had stayed with me. I didn’t want to go up in one but I’d love to see them floating over the Château.

So I set the alarm (my 6am habit had taken a hit in the past week but here was my opportunity to start again) and hoped the rain would keep off. Next morning was cloudy and grey but I was energised. I had no idea, by the way whether there would be any balloons but even if there wasn’t, sunrise would be more than enough. I was half way across the field between the motorhomes and the gardens when I realised there was a big bird about 100 yards away from me stalking something in the grass. A very stork-like bird. Thanks to all my stork sightings I know it wasn’t a stork but I’ve no idea what it was. I couldn’t move in case it flew off but I needn’t have worried he wasn’t going anywhere he was dead still too. Then suddenly he grabbed at whatever he was stalking and swallowed it! That’s another reason he wasn’t a stork, they don’t grab, they’re very dainty.

(Sunrise on a grey day)

There was no sign of a hot air balloon and I realised I was expecting too much, I hadn’t even googled it to see when or where they go up or even if they go up anymore. I could just make out a break in the clouds where the sun was coming through so I went off to get my sunrise pictures. The hour after sunrise and before sunset are called golden hours and I was definitely getting opportunities on this trip to experience what that meant. It’s supposed to be a good time to take photos.

There was no one around, I was completely alone taking pictures and wandering around, like I was a… I don’t know, a princess maybe? It does seem to be a theme… just saying. Next thing I hear something, not bird song, more a heavy breathing or wild boar snorting. I looked up, it was coming from above me (probably not wild boar then…?) And there it was… floating way, way up in the sky.

(Can you see the hot air balloon?)

A balloon! Yep, one solitary balloon way, way, way up high. Every now and again I could see the flame igniting to lift it higher, that was the wild boar snorting sound I thought I heard earlier. (Well, it might have been.)

(This was the closest I got to it)

I was so excited. The whole experience lasted only 15 minutes. I’m not sure hot air balloons have much control over their direction but on that morning some gust of wind brought this one in my direction.

And then it floated away, Mairead.

I live in Ireland☘️ and sometimes travel with my husband in our motorhome. In April 2022 we will be visiting France, Spain and Portugal. I will be writing here.
View all posts by Mairead →
This entry was posted in Travel and tagged camper van, Chambord, château, France, hot air balloon, little things, motorhome, nature, outdoors, photography, sunrise, travel. Bookmark the permalink.
Loading Comments...
%d bloggers like this: